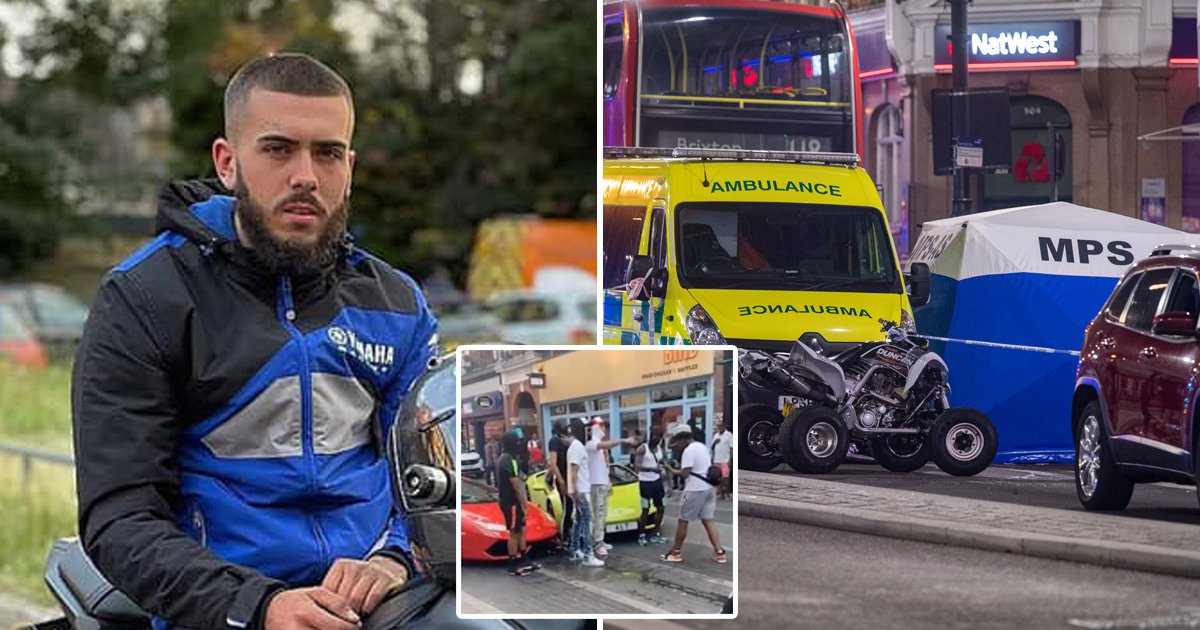 A man stabbed to death in south London last night was filming a music video when he was attacked, witnesses said.

The victim, named by friends as Shane Jerome, was described as ‘one of the best guys’.

Mr Jerome, believed to be in his early 20s, was pronounced dead at the scene on Brixton High Street close to the tube station at around 8.45pm.

CCTV footage from inside a nearby shop captured the moment he rushed towards an ambulance before collapsing in the road.

Passersby began performing CPR before paramedics arrived and took over.

One friend posted on Facebook: ‘Rest in perfect peace to one of the best guys I knew. Was always there just a phone call away, forever and always in my heart.’ 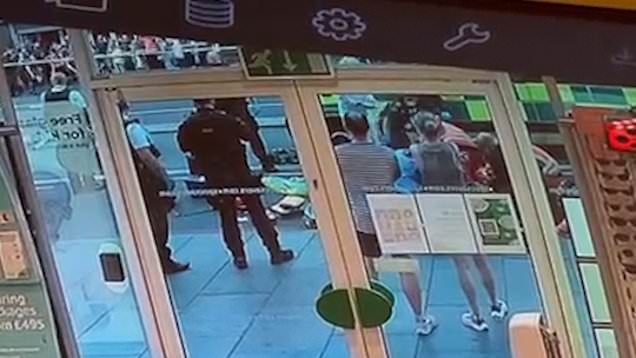 Another woman added: ‘RIP Shane. I honestly can’t believe it.

Emergency services including an air ambulance rushed to the scene outside Brixton tube station, but Mr Jerome could not be saved.

More details emerged today about the incident, with one 24-year-old passer-by saying: ‘I didn’t see the stabbing but I saw him take his last breaths.

‘I saw him on the floor, there were loads of police officers around him.

‘People around said they were making a music video and an argument broke out out of nowhere and a man produced a machete and stabbed this guy multiple times.’

He continued: ‘A girl was slashed as well. They said it was the victim’s girlfriend when she tried to intervene.’

An onlooker told the BBC the incident had involved a number of high-end cars, including a Lamborghini, a Ferrari and a black Range Rover and two quad bikes.

They said: ‘A convoy of cars and quad bikes suddenly turned on one another, leading to one man being stabbed and others involved in a fist fight before running off on foot and by vehicle.

‘The front of the convoy was a black Range Rover, which had a driver that wore a balaclava, and men sitting in the boot of the car, with the boot door open.

‘The man who was stabbed was lying in the middle of the road, with an ambulance on scene instantly, where the man was receiving CPR right away but looked lifeless. Another man who was wearing a balaclava and ski goggles, accompanied by a woman, ran to the victim screaming.’

Another eyewitness said: ‘When I came out of the Tube, guys were chasing each other, a motorbike in the middle of the street in front of the red Lamborghini, others throwing stuff at a white girl and a black boy on a quad bike that ended up in traffic lights.’

The Metropolitan Police said yesterday evening: ‘(The victim’s) next of kin have been informed. Formal identification has not taken place and a post-mortem examination will be arranged.’

Police said a man was arrested nearby on suspicion of causing grievous bodily harm.

Detectives from the Specialist Crime Command had been informed.

Skydiver’s desperate race against time to untwist parachute as he plummets 14,000ft to earth

Is Track and Trace a mandatory legal requirement?

Companies may face legal action over ‘no jab, no job’ policies as ministers pressured to outlaw vaccine ‘discrimination’