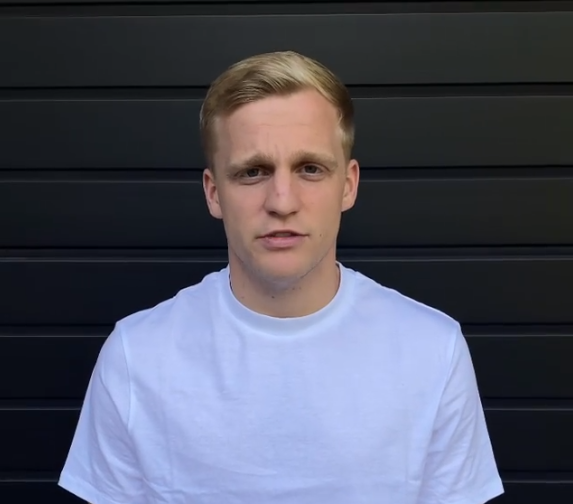 Donny van de Beek has thanked fans for their messages of support as he comes to terms with the ‘big disappointment’ of having to miss the Netherlands’ upcoming European Championships campaign.

The Manchester United midfielder was named in Frank de Boer’s initial 26-man party for the tournament but did not feature in either of the Netherlands’ warm-up games with Scotland and Georgia and officially pulled out of the squad due to a groin injury on Tuesday morning.

Van de Beek will have been desperate to prove himself in the wake of a miserable debut year in England and the 24-year-old must now concentrate on his recovery to ensure he begins United’s pre-season schedule with a clean bill of health.

Netherlands head coach De Boer has confirmed he will not be calling up a replacement for the former Ajax man.

‘As you may have already learned, I unfortunately had to leave the team due to a groin injury,’ Van de Beek told his 2.2 million followers in a short video on Instagram.

‘A big disappointment, especially because it would be my first European Championship and unfortunately I can’t be there now.

‘I want to thank you for all the sweet messages I have received, it means a lot to me.

‘I want to wish the players, the staff, and last but not least the fans a great European Championship.’

Van de Beek was flooded with messages of support following the news of his withdrawal from the squad, with United team-mates Marcus Rashford and Bruno Fernandes among those to reach out with a few kind words.

‘Gutted for you mate @Donny_beek6 but you’ll come back stronger,’ Fernandes, the Red Devils’ Player of the Year, said.

‘Still many Euros and World Cups ahead of you.’

Netherlands were held to a 2-2 draw by Scotland before securing a comfortable 3-0 victory over Georgia in preparation for the tournament.

They open their campaign against Ukraine on home soil at Amerstam’s Johan Cruyff Arena on Sunday night.

The Dutch – currently ranked 16th in the world – are also joined in Group C by Austria and North Macedonia.

Is WWE being sold? Eric Bischoff on recent releases and whether Vince McMahon is selling

Students who removed Queen’s portrait did it ‘out of ignorance’, minister says