MASKED Dancer Tamzin Outhwaite came close to being rumbled by her own brother in the ITV contest – but he mistook her for the busty Frog character that was really Kelly Brook.

The former EastEnders actress came fourth as Scarecrow in the mystery dance show’s grand final on Saturday, which was won by gymnast Louis Smith.

Tamzin, 50, told The Sun how her brother thought he had identified her habits and spotted a hint referring to her stint on BBC military drama Red Cap[/caption]

In her first chat since her identity was unveiled, Tamzin, 50, told The Sun how her brother thought he had identified her habits and spotted a hint referring to her stint on BBC military drama Red Cap.

She said: “He had guessed I was doing The Masked Dancer but was completely convinced I was Frog.

“He said, ‘I know those mannerisms, I know those walks, you’re wearing a military outfit, it’s all linked to Red Cap’.”

Pointing to her chest, Tamzin added: “I was like, ‘That was Kelly Brook! Have you seen this? It’s a completely different body shape’.”

But one reason for her brother’s mix-up may have been because Tamzin, who filmed the show over four weeks and finished a month ago, had put on weight.

Excited by her new post-Covid freedom, she ended up eating out for breakfast, lunch and dinner when rehearsing at London’s Pineapple dance studios.

Tamzin said: “At Pineapple the choreographer and his team were there and it was so joyous at times, you just felt like, ‘Oh my God’. But we couldn’t get near each other. You’ve still got to dance a metre, two metres apart.

“But it was that feeling of, ‘I can leave the house and I can’t believe how ecstatic I feel just dancing’, bearing in mind that we hadn’t done anything for such a long time.

“I was probably the only one in the whole thing that actually put on weight. We’re getting fit and every time I left the house to go there, I was like, ‘This is a brilliant excuse to eat out’.

“So I’d get to the studio, I’d have breakfast, lunch and dinner there in the dressing room because you’re not allowed to leave the room.

“I’d be like, ‘I’d love a full English’, and then I do the dancing thing and then lunchtime would come and, ‘Yeah, I’ll have fish and chips’, and then I’d go and do the rest of it and then the evening would come and I’d have dinner as well.

“When the job finished, and because the costume wasn’t tight, I’d put on weight.”

When I tried to ease Tamzin’s mind by suggesting she was burning it off, she was hilariously self-deprecating and said: “I’d like to think it was.”

She continued: “The only thing that justified it for me was I was eating food that wasn’t cooked by me. When we started The Masked Dancer we were in proper lockdown, there weren’t any restaurants. So I was just like, ‘Oh brilliant’. Every single time I leave the house I’m having something.

“I was even having a three-course meal at Pret. I treated it like a running buffet.

“When the restaurants started to reopen, because I’m such a foodie, I started doing a safari supper.

But one reason for her brother’s mix-up may have been because Tamzin, who filmed the show over four weeks and finished a month ago, had put on weight[/caption]

At this point I suggested that the waiters where she eats probably think she survives on very little, opting for just one course, but she replied: “I don’t think anyone that’s ever met me says she doesn’t eat anything.”

On The Masked Dancer Tamzin managed to avoid being detected in her Scarecrow outfit by pretending to be a teenage boy, in her movements and mannerisms.

She said: “The costume was really baggy. You couldn’t tell if it was a boy or a girl for a bit, and I think it was the right thing to do — not go skin tight or make it overly sexual, as then it might be more female.

“It was lovely to be so inconspicuous for most of the performances.”

And “inconspicuous” really is the word for the producers of The Masked Dancer as they try their utmost to keep their celebrities’ identities under wraps until the big reveal on the show.

Tamzin, whose EastEnders character Mel Owen was killed off in 2019, says making the show was like an SAS operation in terms of secrecy.

And she, like winner Louis Smith and runners-up Bonnie Langford and Howard Donald, were forced to tell white lies to their nearest and dearest for two months as they headed to the studios in London for a “secret project”.

She said: “Once it was done it’s out of your head so then you’re not keeping it a secret.

“It was really while I was doing it, remembering not to wear the sweatshirt that says ‘Don’t speak to me’ out, remembering that if anyone came to the house where the bag was with the visor and all of the costume, I’ve got an explanation for why I’ve got SAS-style clothing and it’s always with me.

“You can only go out of your dressing room to learn your dance and then to put the costume on and you’re covered the whole time.

“It really is SAS time, with completely black clothing — ‘Don’t speak to me’ on my front and the whole visor and balaclava. Not a bit of skin is allowed to be seen.

“But I think once you started, you started to get used to it. I found it really difficult walking down the corridor and seeing the specimens. I crossed one, it was right at the beginning, and it was a rehearsal.

“You never really bumped into anyone, and they were walking down the corridor and I was walking the other way and they walked back, because you can’t cross, and they stepped away.

“And when I walked past them, I was like, ‘That’s a really big man’. And now I realise that was Jordan Banjo.

“The vibe, it’s weird. Some people were really playing things very seriously, and I suppose I wasn’t that serious, and I think I was naughty.

“The producers who looked after us would always watch me in case I talked to anyone. I was like, ‘I’m not going to talk, I’ve signed a non-disclosure agreement’.

“I was a bit naughty because I was excitable and out — and dressed as a scarecrow.” 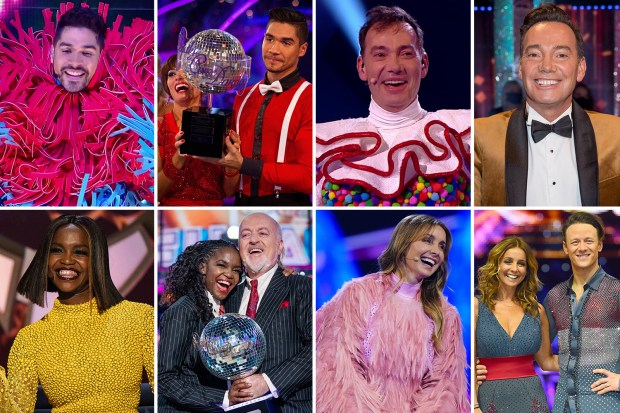 THE Masked Dancer final pulled in a respectable 4.6million viewers – but quite a few complained that the show is “just Strictly on ITV”.

Of the dozen contestants, half were connected to the BBC1 dance contest, including pro Oti Mabuse, who won Strictly with Bill Bailey last year and is on The Masked Dancer panel.

Meanwhile Zoe Ball (Llama) hosted spin-off Strictly: It Takes Two.
“So far 2 of the masked dancers have been on Strictly,” one viewer tweeted, “let’s just call it Strictly on ITV.”

Another added: “Come on The Masked Dancer  . . . stop with the Strictly people!!”

Is ITV’s In Plain Sight based on a true story?