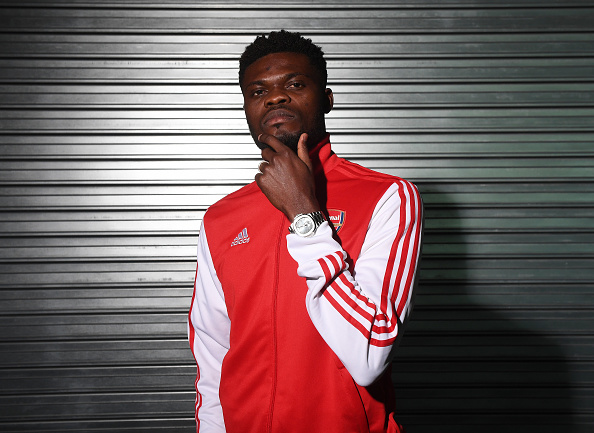 Ghana midfielder Partey could make his debut for the Gunners against Manchester City on Saturday following his deadline-day move from Atletico Madrid.

Partey, 27, was expected to remain at Atletico for another season but Arsenal launched a stunning deadline day bid and met his £45m buy-out clause.

Having helped Atletico win the Europa League and reach a Champions League final, much will be expected of Partey at Arsenal and Gunners hero Parlour is excited by his potential, even suggesting he could reach the levels of Vieira.

‘I’m really looking forward to seeing Partey,’ Parlour told talkSPORT. ‘They haven’t got the energy in that midfield and Partey will bring that.

‘I’ve seen him play quite a few times for Atletico and he’s very effective. I’m really looking forward to see how he copes in the Premier League as well.

‘Hopefully he’s going to play a major part if there is any success moving forward for Arsenal, trying to get in that top four.

‘I think Arteta highlighted him early and said he’s the sort of player we need in that midfield area, because they are a bit lightweight at times in central midfield.

‘I know it’s very difficult to get a replacement of Patrick Vieira, but they’ve not really got someone like him and I think Partey could be close to being as good as Patrick.’

Quizzed on whether Partey could make his Arsenal debut against Man City on Saturday, Gunners boss Arteta said: ‘Well he was here just yesterday, he is getting familiar with everything around the club.

‘Today he will have his first training session, so everything has to come really quickly for him.

‘We knew that before we signed him that he is fit, he is very willing to start playing and we will see how he goes in the next few days.

‘I have seen the buzz around the place, the fans are really happy, I have seen some really positive reactions after we bought him, the same with the team, the squad and the staff.

‘I think he is a player we had the radar on for a long time and we have managed to bring him in and I think he will be a really important addition to the team.’