A RARE virus which leaves humans with a raging fever and covered in oozing blisters was first found in dozens of monkeys in a lab in Denmark more than 60 years ago.

Monkeypox, first discovered in 1958, spreads from animals to humans – and now the UK is “dealing with” a fresh outbreak of the disease.

Monkeypox spreads from animals to humans[/caption] 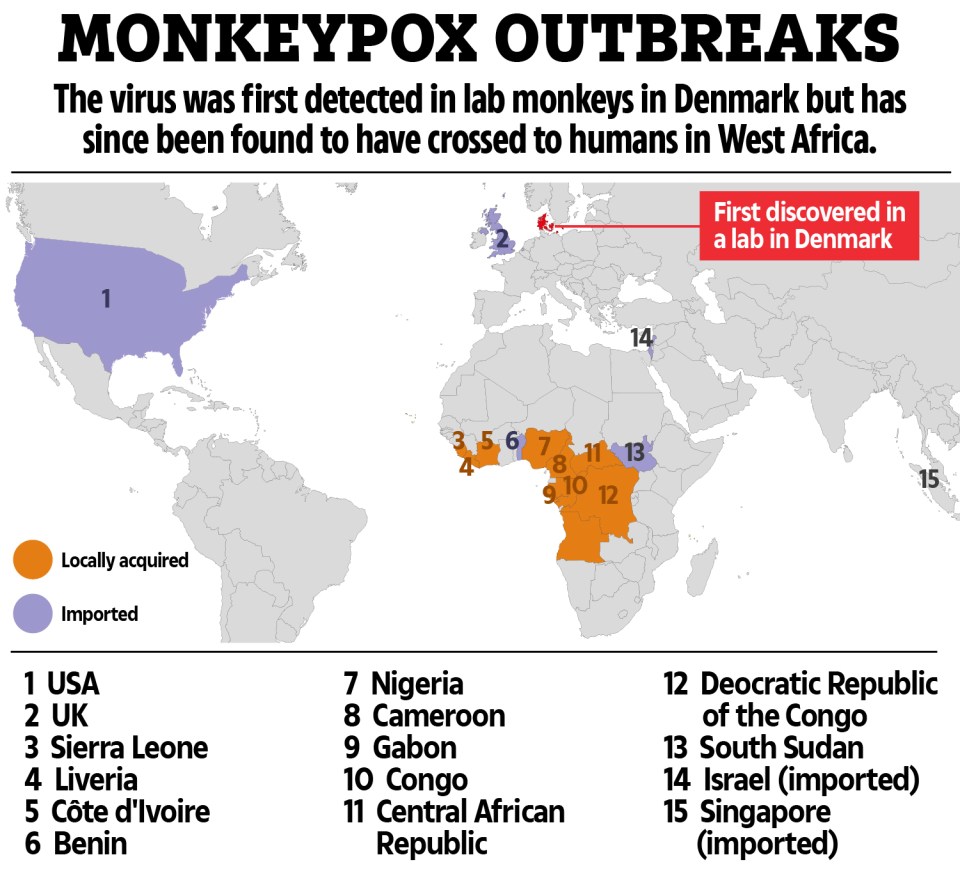 Health Secretary Matt Hancock has not given any details of where cases were, or how many – but The Sun has been told there are two cases in North Wales.

The person caught the horror virus abroad before passing it onto someone in the same house.

But it’s not the first outbreak in the UK – in 2018, more than 50 people were warned they may have been exposed to the disease.

An NHS nurse caught the virus while changing the bedsheets of a patient in hospital, blaming “pathetically small” protective gloves.

Monkeypox was first discovered in 1958 after two outbreaks of a pox-like disease in monkeys kept for research – hence the name monkeypox.

Danish virologist Preben von Magnus was the one to identify the naturally occurring pox infection in crab-eating macaques – the species of monkey – fifty days after their arrival on a ship from Singapore.

More than 30 cases of the virus were reported in the animals at the time – but none of the creatures died and there was no spread from monkeys to humans.

The first human case of viral zoonotic disease was recorded in 1970 in the Democratic Republic of Congo in a nine-year-old boy.

The virus spreads through close physical contact and infiltrates the body through broken skin, the World Health Organisation warns.

Monkeypox leaves people with blisters, rashes and a fever[/caption]

Transmission might occur through bodily fluids, cuts on the skin, respiratory droplets or contaminated objects.

And since 1970, human cases of monkeypox have been reported in 11 African countries, mostly near tropical rainforests.

In the spring of 2003, cases were even confirmed in the United States.

In Africa, monkeypox has been found in squirrels, Gambian poached rats, dormice, and several different species of monkeys.

Luckily, human-to-human transmission is relatively limited, according to the World Health Organisation.

The incubation period of monkeypox is usually from six to 13 days – but it can range from five to 21 days.

And symptoms usually last from two to four weeks, but severe cases of the disease are more common among kids, with a mortality rate of between one and 10 percent.

Authorities warn that the Central African monkeypox virus strain is typically more serious – and more likely to be fatal – compared to the West African strain.

Unfortunately, there is no specific treatment for the disease – but the vaccine for smallpox offers around 85 percent protection, so a childhood smallpox jab might result in a milder case of the virus.

The two patients in the UK who contracted monkeypox were admitted to a hospital in England, where one remains.

Richard Firth, Consultant in Health Protection at Public Health Wales, said: “Confirmed cases of monkeypox are a rare event in the UK, and the risk to the general public is very low.

“We have worked with multi agency colleagues, following tried and tested protocols and procedures, and identified all close contacts. Actions have been put in place to minimise the likelihood of further infection.

“Monkeypox is a rare disease caused by the monkeypox virus and has been reported mainly in central and West African countries.”

“As Health Secretary, you’re dealing with outbreaks all the time. I’m currently dealing with a monkeypox outbreak and cases of drug-resistant TB [tuberculosis].

“That is absolutely standard.”