A MONSTER 16ft crocodile ate 80 people and even snatched children, according to locals in Uganda.

Known as ‘Osama’, the 75-year-old beast is accused of a number of brutal killings, believed to have taken place over 14 years in the small village of Luganga.

The 75-year reign of terror took place in the small village of Luganga, off Lake Victoria[/caption]

Named after the notorious terrorist behind the 9/11 attack, the reptile’s reign of terror took place from 1991 to 2005 when it’s alleged that it wiped out a tenth of the village’s population.

According to reports, the beast would emerge from Lake Victoria – Africa’s largest lake – to snatch children and swim beneath fishing boats to purposefully capsize them.

It led villagers to became convinced that the creature was “immortal” or even “Satan himself.”

One man who witnessed and survived an attack by the fearsome reptile, spoke of the croc’s murderous streak which he said killed his brother.

Speaking to the Sydney Morning Herald, Paul Kyewalyanga, claimed he was rowing in the back of his boat as his brother Peter fished from the front when Osama leapt in and snatched him.

He recalled: “Osama just emerged from the water vertically and flopped into the boat.

“The back of the boat where I was sitting was submerged.” 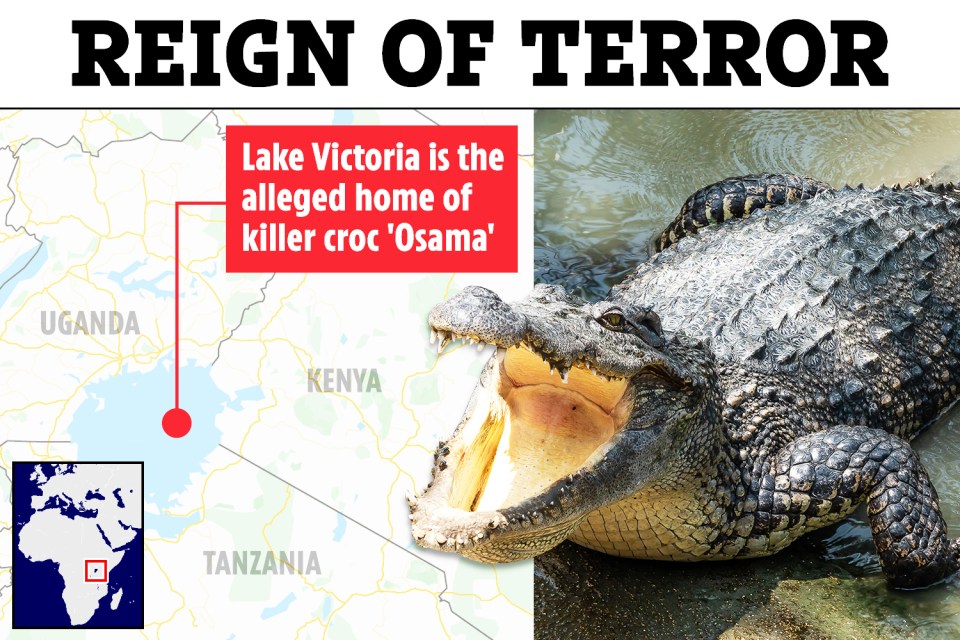 The terrified fisherman said he called for help, but the crocodile latched onto Peter’s leg with his giant jaws and began to pull at him, trying to get him into the water.

Paul added: “Peter was clutching the side screaming. They fought for about five minutes until I heard a tearing sound.

“Peter shouted, ‘He’s broken my leg.’ Then he let go and was dragged into the lake.

“A few days later we found his head and his arm.”

As villagers became more frightened, some felt compelled to pray in the middle of the night for protection from the deadly predator, reports suggest.

The deadly reign was only ended when the monster croc was captured in 2005.

After a stakeout lasting for seven days and nights, a group made up of 50 local men and wildlife officials lured the beast in to a trap using a pair of cow’s lungs as bait.

As Osama reportedly jumped up to grab the lungs, he inadvertently bit in to a snare which snaked around his teeth.

Pictures captured show how they restrained the thrashing beast with ropes and hoisted him on to the back of a pick-up truck.

Yet, those eager to slay the beast were told that it wasn’t allowed.

Officials told them: “Even he has rights. He cannot be killed with impunity.”

Body of man found after shed fire as woman, 64, arrested on suspicion of murder

Woman, 25, killed after being hit by a police car on job as probe launched

A ROOM WITH A QUEUE

Instead he was given to the owners of Uganda Crocs to be used in their breeding programme.

It was hoped that he could be used to create thousands more giant crocodiles whose skin could be turned in to handbags for fashionistas abroad.

These days the farm is a tourist attraction where members of the public can pop in to see the 5,000 crocodiles being fattened up ready for slaughter.

How long does the G7 summit 2021 last and why is it in Cornwall?