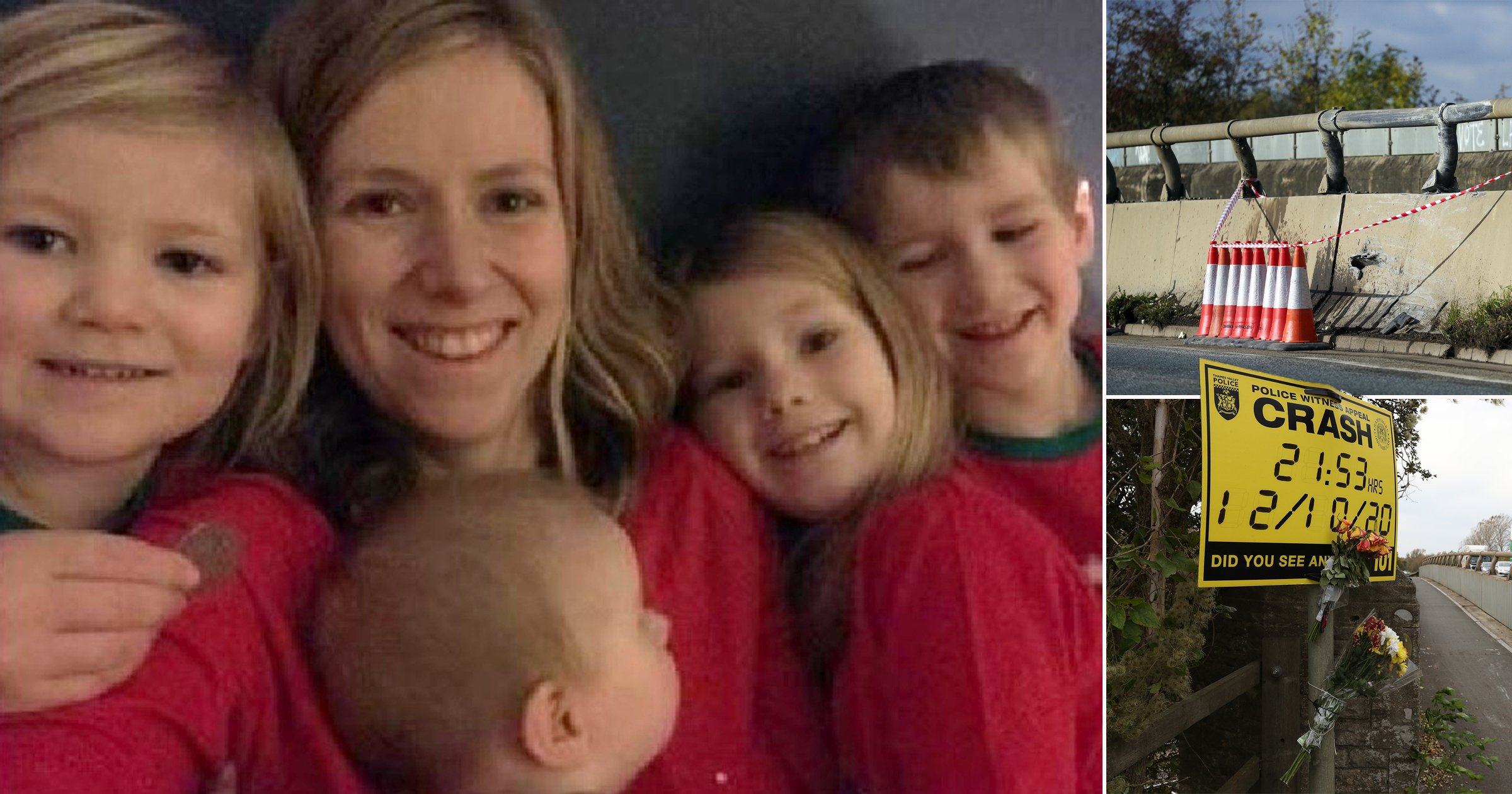 A mum and her three children were killed when their car swerved onto the wrong side of the road and smashed into an oncoming lorry.

Dad Josh and the couple’s youngest child, 18-month-old Penny, were the only two who survived the disaster after being treated in hospital.

Now, an inquest into the devastating deaths has concluded Zoe and her children died in a road traffic collision.

The family’s Subaru ‘suddenly’ veered onto the opposite side of the A40, in Oxfordshire, and crashed into a Renault 480 lorry which weighed 36,000 kilograms.

The inquest has had to close without any ‘clear reason’ as to why the car swerved into the wrong side of the road.

Whilst the senior coroner, Darren Salter, could not completely rule out the possibility of Mrs Powell deliberately swerving into oncoming traffic, there was ‘no evidence’ the mum had thoughts of harming herself or her children.

Mrs Powell has been described as ‘clearly devoted to her four children, her marriage and her [Christian] faith’.

Mr Salter said: ‘It’s more likely to be due to fatigue or distraction, or a combination of the two, and that the steering input was driver error.

‘The cruise control was engaged and at the last moment the accelerator was pressed instead of the brake, which is a phenomenon sometimes seen in these circumstances.’

The family were on their way back from Mr Powell’s parents’ house in Worcestershire to their home in Chinnor.

Mr Powell has no memory of the crash but lorry driver Lorry driver Adao Patricio told the inquest: ‘I had nowhere to go. The car came across onto my side of the road very quickly – I don’t know how that could even happen.

Mrs Powell, an artist and author, was pronounced dead at the scene from multiple injuries, along with her daughter Phoebe.

Simeon and Amelia were rushed to John Radcliffe Hospital where they too were pronounced dead with Simeon suffering traumatic brain injuries and Amelia a severe head injury.

Little Penny survived after she was thrown out of the car by the impact of the collision. Drivers who stopped to help later found her crying on the side of the road.

Mr Powell, who had been extracted from the wreckage with serious injuries, spent several months in hospital but now he and his youngest daughter have been discharged.

The family said in a statement: ‘The conclusion of the police investigation and the publication of the coroner’s inquest bring closure to what has been a very difficult part of the wider family’s lives.

‘Whilst there is much that we will never fully understand about the crash, it is helpful to comprehend some of the potential explanations of what led to it.

‘We thank the police, coroner and crash investigators for their hard work and thoroughness in it all.

‘The possibility that such a small distraction may have caused such a horrific accident should act as a painful reminder for everyone that roads are dangerous places; the actions of a single moment have wrecked an entire family and had a lasting impact on everyone around them.

‘Whilst it may be unpleasant to conceive, there is not a single driver who has not been in a similar situation but by luck alone they have avoided a serious crash.

‘Driving is not as safe as we sometimes wish it was. We all have a duty to always drive to the best of our abilities and ensure that we keep the roads as safe as possible.’

The statement continued: ‘As a family we encourage the wider public to learn from our heartbreak and please make sure they make the right choices when driving on the road.

‘It is hard to find the words to pay tribute to the loss we have suffered. We are very grateful that Zoe, Phoebe, Simeon and Amelia carried themselves excited by the joy of life.

‘In doing so they have left us with an abundance of happy memories that we can reflect back on fondly. The memories of past joy balance the reality that we will make no more memories together and it is hard to escape the wondering of what life would be like if they were still here.

‘We miss them all greatly but are very glad of the times we had together, and as Christians we find rest knowing that their experience in heaven with Christ surpass anything they knew on earth.

‘We have been touched by the depth of support and generosity that has been provided by friends, family, the church and wider community. This has carried us through some very difficult times.

‘We’d like to thank everyone who has wrapped their arms around us and supported us physically, financially and emotionally.

‘Our thoughts go to those who were at the crash scene that bore witness to this horrific accident, especially the lorry driver.

‘As a family we hold no ill feelings and hold no responsibility towards him, we recognise that none of his actions led to the accident.

‘Our hope is for peace for all who have been troubled by the collision and its aftermath. By the grace of God, Josh and Penny have survived this horrific crash with amazingly minimal long term physical impairment.

‘This is in no small part thanks to the public at the crash itself, the hard work of the emergency services and those within the NHS who provided treatments.

‘As we have learnt more of the events before and after the accident, we are blown away by the depth of humanity shown by the emergency services and the huge effort they made to try to save everyone, especially Simeon and Amelia.

‘We have witnessed first-hand the hard work that has gone into Josh and Penny’s treatment, and seen the amazing transformation in restoring their ability to live life.

‘We want to take this opportunity to thank everyone involved who has worked to not only help Josh and Penny survive but give them their lives back.

‘The family wish to thank the press for respecting our privacy up to this point, this space has helped us grieve and process the horrific events.’

Will there be a seventh series of SAS: Who Dares Wins?

Family of Shona Gillan, 18, beg for author of mysterious note with ‘significant info’ to come forward after teen’s death