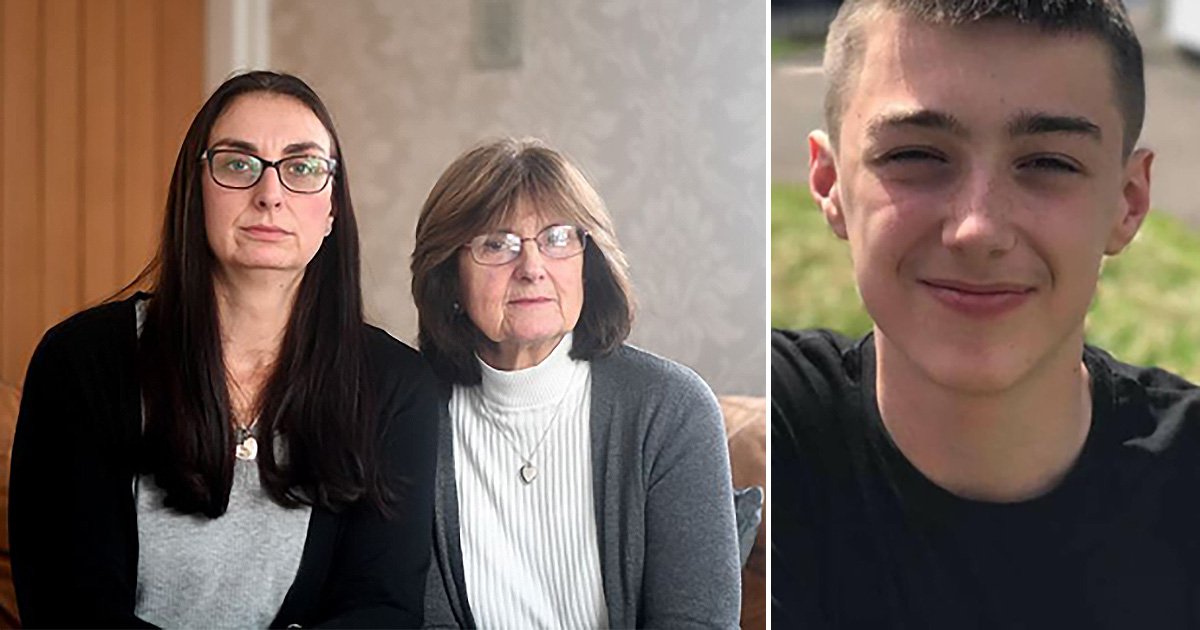 A grieving mum is urging Snapchat to raise its minimum age to 18, claiming bullies on the platform drove her teenage son to take his own life.

Jack Parker was found dead in woodland near his home in Tyldesley, near Wigan, Greater Manchester, on July 28 of last year.

Days earlier, ‘a swirl of unsubstantiated speculation’ about the teen had emerged on social media, an inquest at Bolton Coroner’s Court heard yesterday.

His mother, Karen Robinson, told the hearing he also received a number of threatening messages over Snapchat.

In one, a user is said to have claimed Jack ‘was going to get jumped and needed to watch his back’.

Snapchat messages are deleted the moment they have been read so it is not known who sent the message, but Karen said she believed it played a role in her son’s death.

However, a coroner said he was unable to establish whether the messages had a ‘direct bearing’ on the Fred Longworth High School pupil’s death, as the hearing was told Jack had a ‘number of worries’.

Giving evidence, Karen said her son had struggled with not being able to go out and see his friends or girlfriend during last year’s lockdown.

She said Jack was also undertaking mock exams at school and the workload was ‘getting on top of him’.

Then, in June of last year, the pupil’s relationship with his ‘first love’ ended, which he ‘struggled to get his head around’, his mum said.

The inquest heard how Jack asked a friend where he could get antidepressants.

At 2.30pm on the day of Jack’s death, Karen and her partner, Andrew, were going out for a meal to celebrate their wedding anniversary.

Karen said: ‘We asked if he wanted to come and he said no. I made him a hot chocolate and took it up to him.

Mum says son, 15, took his own life after Snapchat bullies threatened him

From Russia with hate: How pro-Kremlin bots are fuelling Covid-19 conspiracy theories

‘I told him I loved him and he said he loved me too. That was the last thing he said.’

While she was out, Karen received a text message from Jack’s ex-girlfriend to say she was concerned about him, so she rushed home and dialled 999 to report her son missing.

Police traced Jack’s phone to Colliers Wood, near Tyldesley Rugby Union Club, where they found his body at 9pm that evening. A post-mortem examination said his cause of death was hanging.

The inquest heard Jack was not known to any mental health services, but had confided in his head of year at school that he was struggling with lockdown and was ‘upset’ about the recent break up.

In a statement, Detective Inspector Tanya Kitchen said the school had contacted his family to make them aware he had been ‘feeling down’.

The inquest heard Jack was ‘shy’, but had a number of friends and had aspirations of joining the RAF.

Recording his conclusion, Senior Coroner Timothy Brennand said he was satisfied Jack had intended to end his own life.

He described him as ‘a thoroughly decent, hard-working, popular young man’, but added: ‘It was clear Jack had a number of worries and heartache.

‘There is evidence he was possibly suffering from some levels of anxiety and low mood, and possibly undiagnosed depression.

‘Jack was a young man with everything to live for. But he must have thought that taking his own life was the only way out.

‘This case is a further salutary reminder of the responsibility we all have as members of the community that whenever we send any messages into the internet ether, there is sometimes a cause and effect.’

Mr Brennand said he intended to write to Snapchat to raise the concerns of Karen, who is campaigning for the social media platform to increase the minimum age from 13 to 18.

Speaking after the hearing, Karen said: ‘I just want young people to talk. It is too easy to send nasty messages, especially on Snapchat. There is no evidence. It just disappears.

‘They need to understand the implications of it. I want people to know there is another way.’

Karen said she hoped to spread the message to young people in schools, including Jack’s old high school.

Paying tribute to her son, she added: ‘Jack was a beautiful soul and friend to many. He would help anyone.

‘I have received a huge amount of messages saying he had helped other people with their confidence and to get help.

‘He just could not get it for himself. I wish he had reached out to anyone.

‘I hope whoever it was that was bullying him has got a conscience and learns from this and doesn’t do it to anyone else.’

Why cloud gaming is the key to the preservation of games

‘Mystery man’ seen near river where boy, 5, was found dead an hour later

Where is Belarus and is it in the EU?