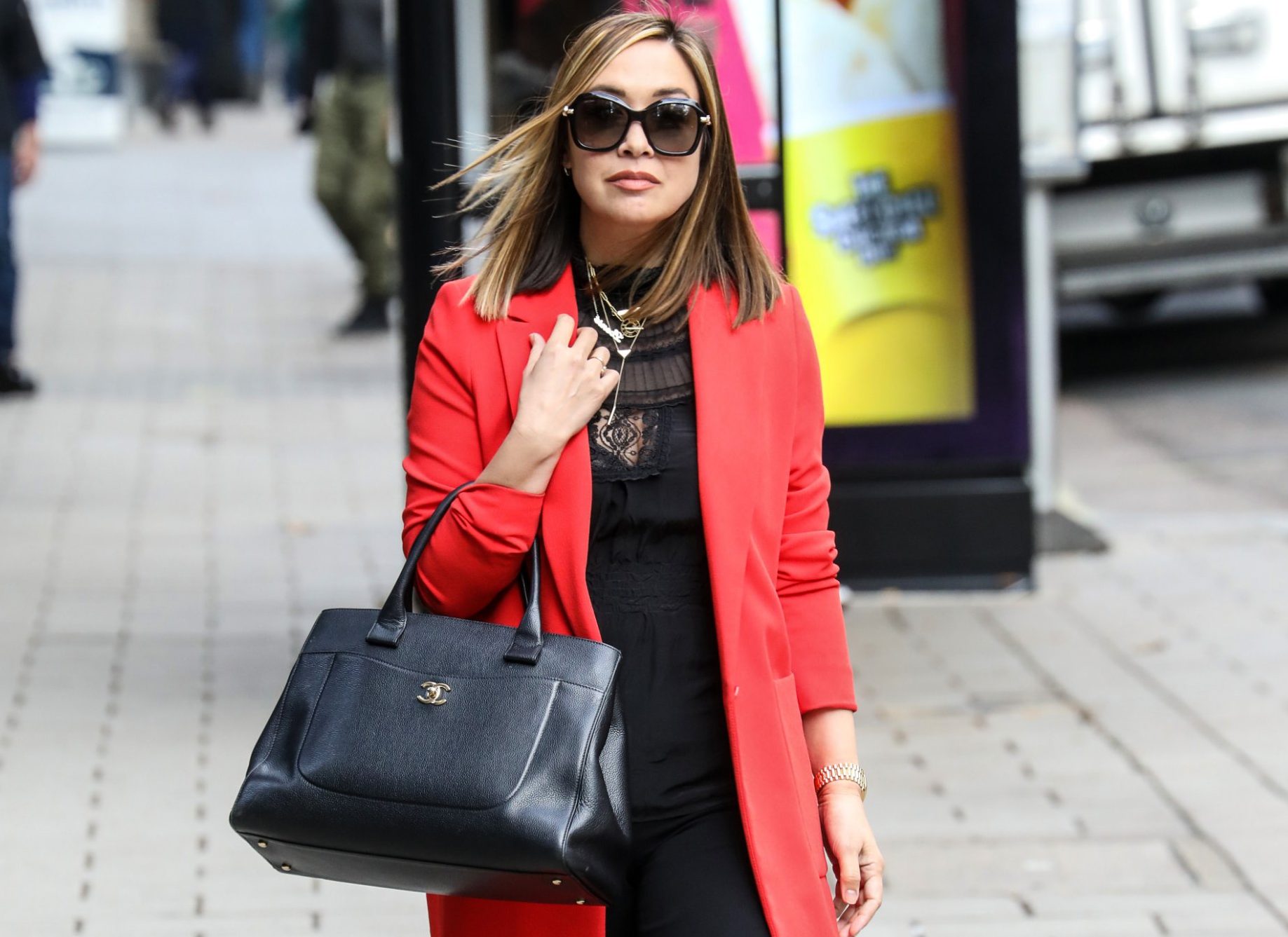 Myleene Klass headed out in London after she opened up about suffering four tragic miscarriages on Instagram.

The TV presenter was praised this week when she spoke out over her losses, explaining she was ‘mamma to seven babies’ – including daughters Ava and Hero, son Apollo and ‘four little stars in the sky’.

Following the post, the 42-year-old seemed in good spirits as she arrived at the Global Radio studios ahead of her Smooth Radio show.

She opted for a black top and wide-legged trousers for the day, coupled with oversized sunglasses, a Chanel bag and trainers.

The star added a pop of colour to the look, finishing things off with a bright red coat.

Myleene’s outing comes after she opened up about her devastating miscarriages on Instagram, to raise awareness baby loss awareness week.

Taking to Instagram, the singer revealed that Chrissy Teigen’s public post about her own loss encouraged her to speak out herself.

‘I am Mama to 7 babies, Ava, Hero, Apollo my rainbow baby and 4 little stars in the sky,’ she told fans.

‘I know after my own MC’s how I scoured the internet for stories similar to mine for peace, reassurance. I hope this helps even one lost soul.’

They occurred after she had welcomed her daughters – but before she safely gave birth to Apollo last August.

Myleene explained the circumstances behind each of her miscarriages, saying the first occurred when she was flying home for a dilatation and curettage procedure.

‘#1. At the airport, flying home for a D&C. I’d started bleeding heavily at 10wks on holiday. The scan was the saddest sight I’ve ever seen in my life,’ she continued. ‘The first and last time I saw my baby.

‘As the doctor pushed the camera on my belly, the familiar black and blue image of my baby sprung onto the screen, then started to sink and slowly floated down, til it just hunched over. I knew. “I’m sorry there’s no heartbeat”. The feeling is nothing short of traumatic, shock.

‘At my D&C I was asked to confirm the procedure. I cried so hard the nurse held my hand and answered for me. They taped my bracelet to my wrist, two gold swallows. It made me sob. Swallows love for life and always come home.

‘I told the anaesthetist to please make sure I wake up as I’m a mum then I cried again at what they were going to take out. I woke to emptiness and the horror of what had happened. I felt I’d failed my baby and my partner.’

Myleene said her second miscarriage and the resulting D&C – a procedure which removes tissue from the womb after a miscarriage or abortion to prevent infection – were even more traumatic.

‘Walking past the pregnant women in reception was torture. This D&C was no less traumatic,’ she wrote. ‘In fact, the familiarity of it cut deeper.

‘The “wishes to dispose of the products of pregnancy” form, the walking to theatre, the ugly socks. Having everything one minute, a name, a school, then nothing.

‘The third, I miscarried at work. The fourth, the loo. Whilst I could get pregnant, there was no explanation for why I couldn’t keep them.

‘The Dr’s took no chances with Apollo,’ she concluded. ‘I injected countless, endless hormones into my belly to keep my placenta working.

‘He signifies everything good in the world to me, my miracle.’

MORE: Strictly’s Jacqui Smith has been getting advice from ballroom legend Ed Balls ahead of the launch

MORE: Dancing On Ice stand-in Matt Richardson left with concussion after being ‘hit with pole’ during training