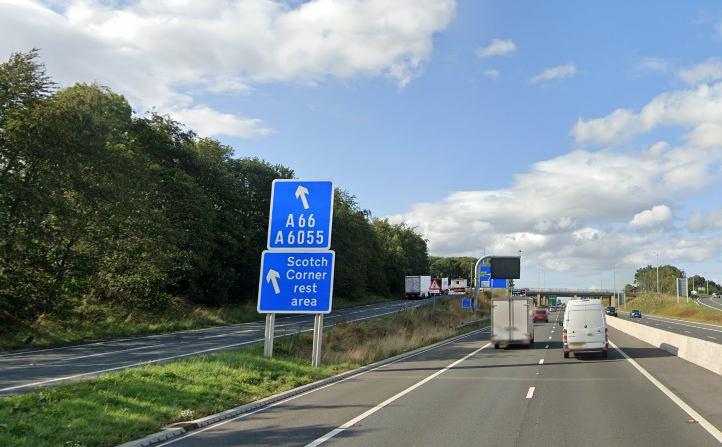 Drivers were left gutted after a road had to be closed due to an offal spill.

The animal entrails covered the northbound exit slip road of the A1(M) at Scotch Corner in north Yorkshire yesterday evening.

Despite teams working throughout the night to try to clean up the mess, it was judged that the road was too slippery and not safe to travel on.

Road workers were then given the foul job of resurfacing the tarmac, with the heatwave making the already grim task far harder.

Highways England said its officers on the scene had been complaining about ‘the stink.’

This morning, the agency warned drivers, particularly those heading to the Lake District or Cumbria, to avoid the area as the road was likely to be closed for most of the day.

Just before the evening rush hour at 5pm, it was confirmed that the spillage had been successfully treated and the road was reopened.

It’s still not known where the offal mess came from, as the driver who spilled the load has not been located.

Dad finds secret bunker in garden while revamping his house

Scammer took £42,000 from Tinder date by pretending her mum was dead

Despite the frustrations, some on social media saw the funny side.

One person tweeted: ‘They just couldn’t wait to de-liver could they…’ while another added: ‘Straight to the heart of the matter as always!’ A third quipped: ‘At least you have the guts to tell people.’

It’s not the only road that has been forced to close due to an unusual spillage recently.

Last month, the A14 in Cambridgeshire was shut for the day after a HGV overturned, sending gallons of tomato puree and olive oil onto the carriageway.

Paulina Porizkova, 56, hilariously covers up with masks in topless photo

Hairdresser’s pants stolen after drink spiked on night out