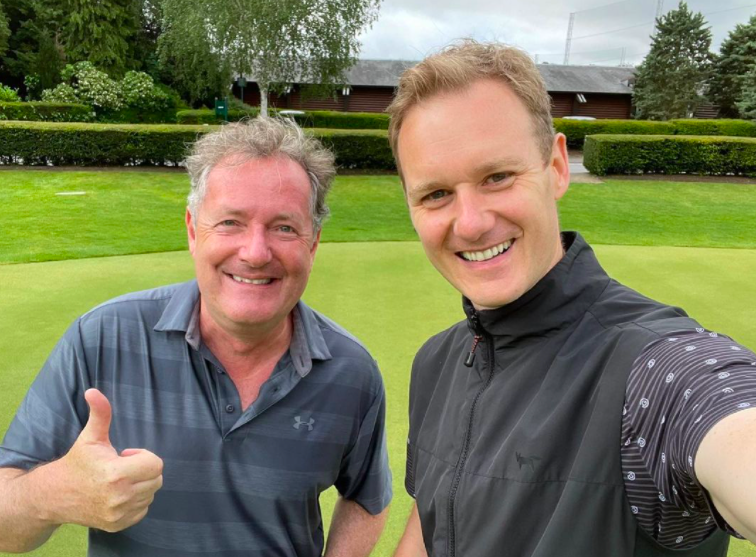 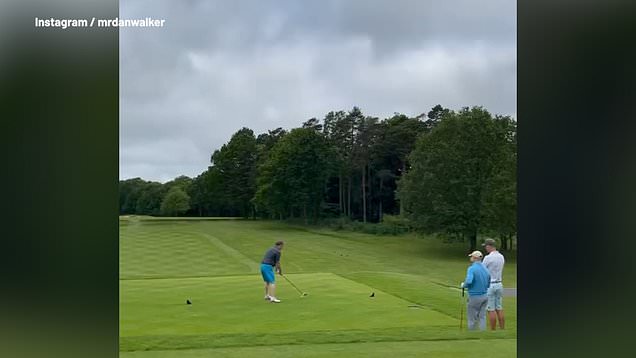 In a sign that hell has well and truly frozen over, Piers Morgan and Dan Walker were seen looking like the closest of chums despite their ongoing TV feud.

The pair hit the golf course at Wentworth in Surry on Friday just days after former Good Morning Britain presenter Piers joked he was gearing up to take a seat on BBC Breakfast alongside rival Dan after Louise Minchin announced her departure.

But suggesting their often-traded barbs are nothing but a spot of entertainment for the masses, the pair snapped a friendly selfie for social media.

Safe to say we’re all sorts of perplexed by this show of unity. We’re not used to this. It feels scratchy and unfamiliar.

The former tabloid editor flashed a thumbs up and wide, toothy grin as Dan took the shot, with the pair kitted out in their golfing best.

Dan shared the same selfie to his own account, adding: ‘Can’t believe it… turn up at Wentworth and guess who is in the group in front???? Yep…@piersmorgan 😂😂’

He also uploaded a video of Piers teeing off and then kicking off, after his drive up the fairway failed miserably.

‘On the tee of the west course, Mr P Morgan,’ Dan is heard saying, as Piers sidled up to his mark and prepared to swing for a winner.

Sadly, despite Dan asking the journalist not to let him down, Piers’s big moment went down like a lead balloon as he appeared to hook the ball, with the presenter not hiding his anger towards the failed shot.

He pretended to smash his club into the grass in mock frustration (mind you, we think the frustration is totally real) as his fellow golfers burst into laughter.

‘You always deliver,’ Dan yelled as he giggled at Piers’s sporting misfortune.

It comes after Piers’s trolling of his former breakfast rival, after Dan’s couch-partner Louise announced her exit after 20 years on the programme.

‘BBC wanted the guy who beat you in the ratings, and the first same-sex male breakfast presenting team to appease the wokies.’

Doctor warns against singing and chanting in pubs during Euros matches

Sadly Dan wasn’t picking up what Piers was putting down as he lobbed a blistering response that took the mick out of Piers’s GMB walk-off in March.

He mused: ‘No thanks… wouldn’t want you storming off if Carol asked you something awkward 😂😂😂 TearsForPiers.’

Perhaps a day on the course will lock in this apparent, new breakfast pairing. On second thought, we won’t hold our breath.

MORE : Andrew Neil: ‘Piers Morgan has a different idea of what he’s worth to GB News’

Phillip Schofield firmly against extending lockdown: ‘Suicide is up, anxiety is through the roof and businesses are folding’