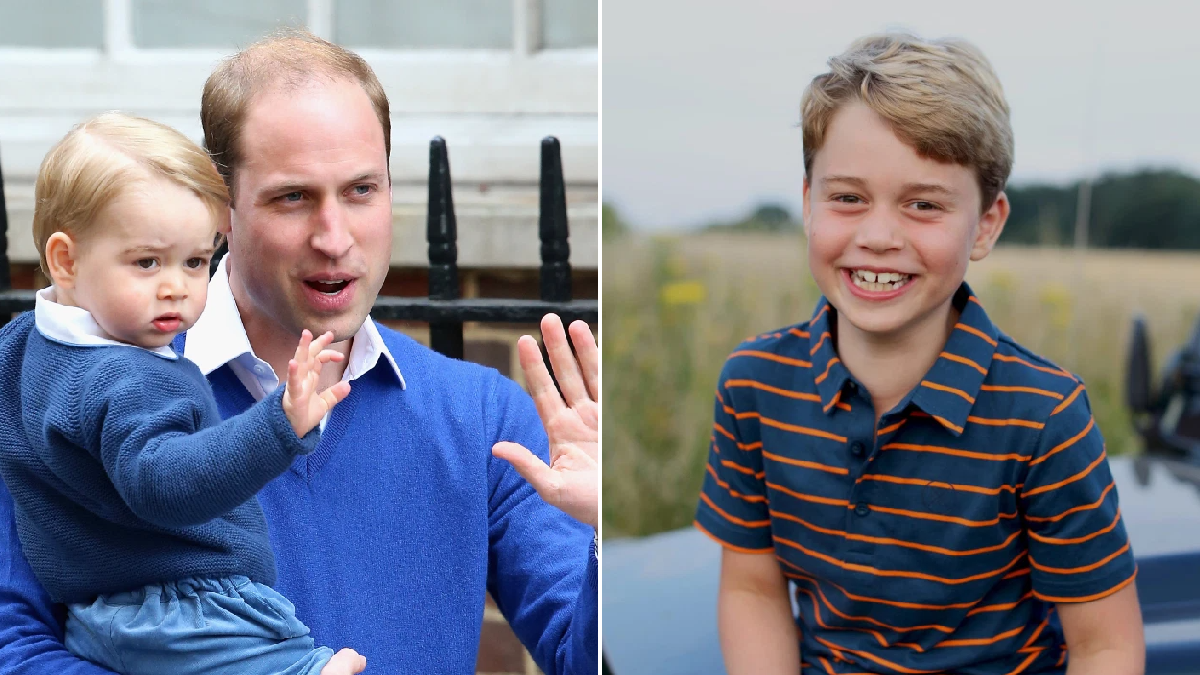 Happy birthday Prince George! The eldest child of the Duke and Duchess of Cambridge, who is third in line to the throne, turns eight today.

Prince George of Cambridge, who was born in 2013, is growing up fast – in fact, he has just finished Year 3 at Thomas’s Battersea school.

Kensington Palace released a new picture of the young prince to mark the occasion, once again taken by his mother Kate.

Here, Metro.co.uk celebrates Prince George’s special day by looking back at his most adorable moments.

At his christening, the prince wore a traditional christening gown which is a replica of an original dating back to 1841.

It was judged to be too fragile for further use, so the Queen’s senior dresser Angela Kelly commissioned the new one, which was also worn by Princess Charlotte and Prince Louis.

The birthday pics began even before Prince George turned one, with this adorable pic taken just days before his first birthday in 2014 showing that he was already toddling along.

The Prince was close to celebrating his second birthday when his sister Princess Charlotte was christened at Sandringham on July 5, 2015.

He was seen wearing an embroidered red and white shirt and red shorts as he left the church of St Mary Magdelene on the estate.

It’s become quite the tradition for the Duke and Duchess of Cambridge to release new photos of their children on their birthdays, and this one, from 2016, shows Prince George as he turned three.

The snap saw him playing with the family’s dog Lupo on a picnic blanket and feeding the English cocker spaniel ice cream.

Even at a young age, Prince George had had the experience of going on a Royal tour – here he is visiting Canada with his parents in 2016.

The prince looks absolutely delighted to see the Canadian crowds.

As George has got older, he’s been seen more often with his younger sister Charlotte.

This snap sees the pair of them in June 2017 – when George was four – watching Trooping The Colour from the balcony at Buckingham Palace.

The Prince looked as happy as ever as he celebrated his fourth birthday in July 2017, posing for his annual birthday photo in a striped shirt and sporting a big smile.

The Duke and Duchess of Cambridge released this adorable snap as Prince George turned five in 2018.

The Duchess of Cambridge once again snapped her son as he celebrated his sixth birthday in 2019.

Clad in the white England football shirt, the youngster can be seen grinning gleefully and flashing his missing tooth as he lies in the garden outside Kensington Palace.

It was an exciting day for the Prince in 2019 when his sister Charlotte joined him at school.

Royal biographer Penny Junor told Hello! magazine at the time: Prince George is a very protective and lovely older brother. ‘I’m sure he’ll look after his little sister and take great pride in showing her the ropes’.

Prince George was seen beaming in his seventh birthday photos, celebrating his birthday after months of home-schooling amid lockdown.

During the lockdown, George was pictured a number of times with his younger Princess Charlotte and Prince Louis, aged two, applauding health and care workers during the weekly show of support.

Technically this isn’t a snap, but the nation fell in love with Prince George all over again at the Euro 2020 final between England and Italy.

The young footie fan truly encapsulated the excitement of the nation when Luke Shaw scored a goal within two minutes of the match starting… and again when he had to be consoled by his father when Italy took home the trophy.

In the picture, George can be seen smiling sweetly at his mother’s camera while sitting on the bonnet of a Land Rover Defender.

His late great grandfather Prince Philip, the Duke of Edinburgh, who died in April a few months before his 100th birthday, was known to have a love of the vehicle, so much so that his coffin was carried by a specially adapted one that he helped to design.

George is sporting one of his signature polo shirts in a navy with orange stripes colourway – which you can buy from John Lewis for £8 – £12.

MORE : Ranvir Singh feels sorry for Prince Charles not seeing Harry’s children: ‘He must miss them’

Ranvir Singh feels sorry for Prince Charles not seeing Harry’s children: ‘He must miss them’

Good Morning Britain’s Laura Tobin squeals as she’s bitten on air by lairy penguin: ‘I am not a fish’

Cops search for missing OAP, 83, after she vanishes from village home as man in his 40s arrested on suspicion of murder

Kim Kardashian wannabe, 30, jailed for £5m money smuggling after she was caught with cash-loaded suitcases at Heathrow