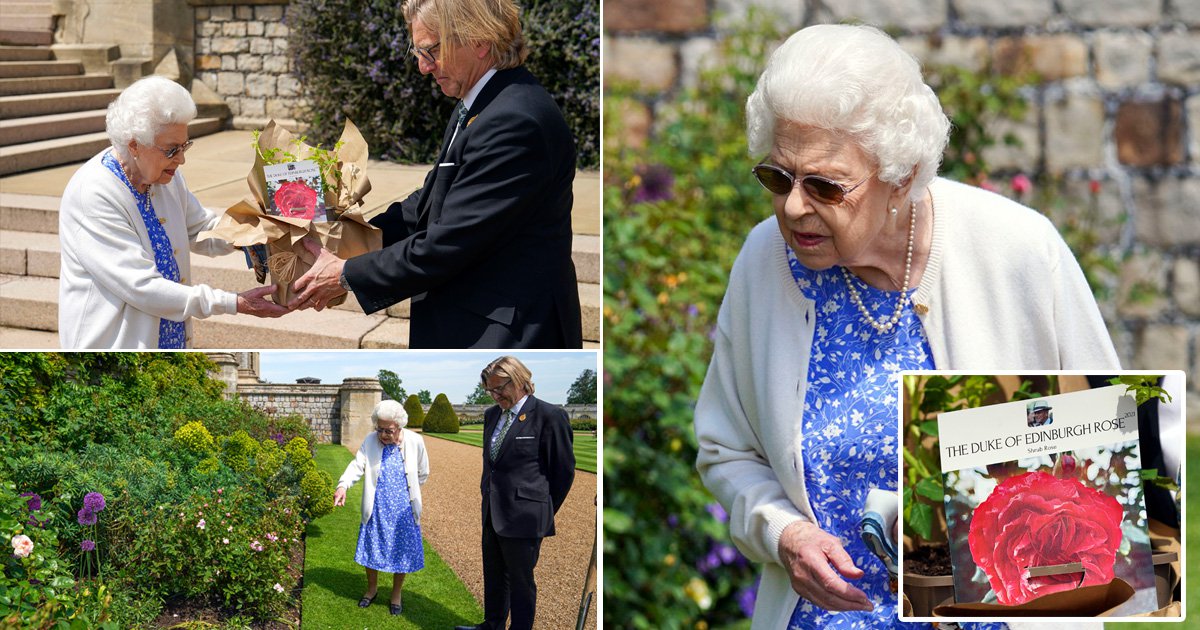 The Queen has poignantly marked what would have been Prince Philip’s 100th birthday by planting a rose named after her late husband.

The newly-bred Duke of Edinburgh Rose was planted in the East Terrace Garden of Windsor Castle as a permanent tribute to Philip, where the couple spent their final months in lockdown together.

Gifted to the 95-year-old monarch from the Royal Horticultural Society, the deep pink rose was officially named after the duke following his death on April 9.

The Queen described the double-flowered rose bush as ‘lovely’ and that the tribute to her husband of 73 years was ‘very kind’.

She received the shrub wrapped in brown paper last week by the aptly-named Keith Weed, president of the RHS.

Looking at the label, the Queen beamed as she saw it features a small profile photograph of a smiling Philip wearing a white panama hat.

Mr Weed told the Queen: ‘It’s a rose named the Duke of Edinburgh Rose to mark his centenary and it’s a commemorative rose for all the marvellous things that he did over his lifetime and for everyone to remember so much that he did.

‘Each rose, there’s a donation that goes to the Living Legacy Fund which will help more children. It’s a beautiful flower in itself, a double flower.’ 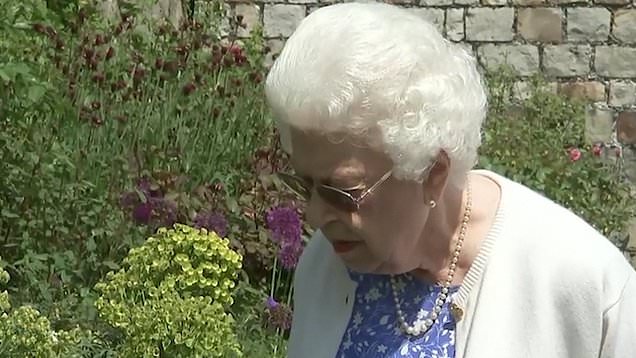 The Queen replied: ‘It looks lovely.’

Her Majesty watched as Windsor’s head gardener Philip Carter planted the shrub at the front of the mixed rose border of the East Terrace Garden – the layout of which the duke was instrumental in redesigning.

Showing the Queen what the rose will look like in full bloom, Mr Weed joked: ‘Right now, with a cold spring and nature being a little bit behind, it doesn’t look so lovely there but that’s what it looks like. The picture says it all.’

Dressed in a floral blue dress, white cardigan and pearl necklace, paired with sunglasses in the sunny June weather, the Queen appeared in good spirits as the pair chuckled over the lack of blooming in the garden.

She remarked that the cold weather in May means ‘nothing has flowered here much’.

The Duke of Edinburgh Rose was newly bred following Philip’s death by Harkness Roses, which has been breeding and growing British roses since 1879.

For every rose sold, £2.50 will be donated to the Duke of Edinburgh’s Award Living Legacy Fund, which will help one million young people take part in the scheme set up by Philip in 1956.

The monarch will take a ‘quiet moment of reflection’ today as the royals prepared exhibitions at Windsor and Edinburgh to ‘collectively celebrate the Duke of Edinburgh’s extraordinary life’.

Palace insiders said the royals hope that ‘many people will be able to share in his incredible life and legacy’ through the exhibits – some of which the Queen personally chose.

A royal source told the Mirror: ‘Her Majesty will take a quiet moment of reflection on what would have been the Duke’s 100th birthday and, along with the rest of the Royal Family, is very much hoping many people will be able to share in his incredible life and legacy.

‘It is the most fitting way to ­collectively celebrate the Duke of ­Edinburgh and for his life to be honoured in this way is very special.’

Philip was the nation’s longest serving consort and dedicated decades of his life to royal service.

He died peacefully at Windsor Castle just nine weeks before his 100th birthday, following a series of hospital stays. His funeral was held there on April 17.

The Queen and Prince Philip were pictured together in the Berkshire royal residence’s quadrangle to mark his birthday last year, while the couple spent isolation together.

Who is Paul Weller and what’s his net worth?

Teenager, 18, on quad bike ‘murdered’ in crash as mum pays tribute to her ‘brown-eyed boy’