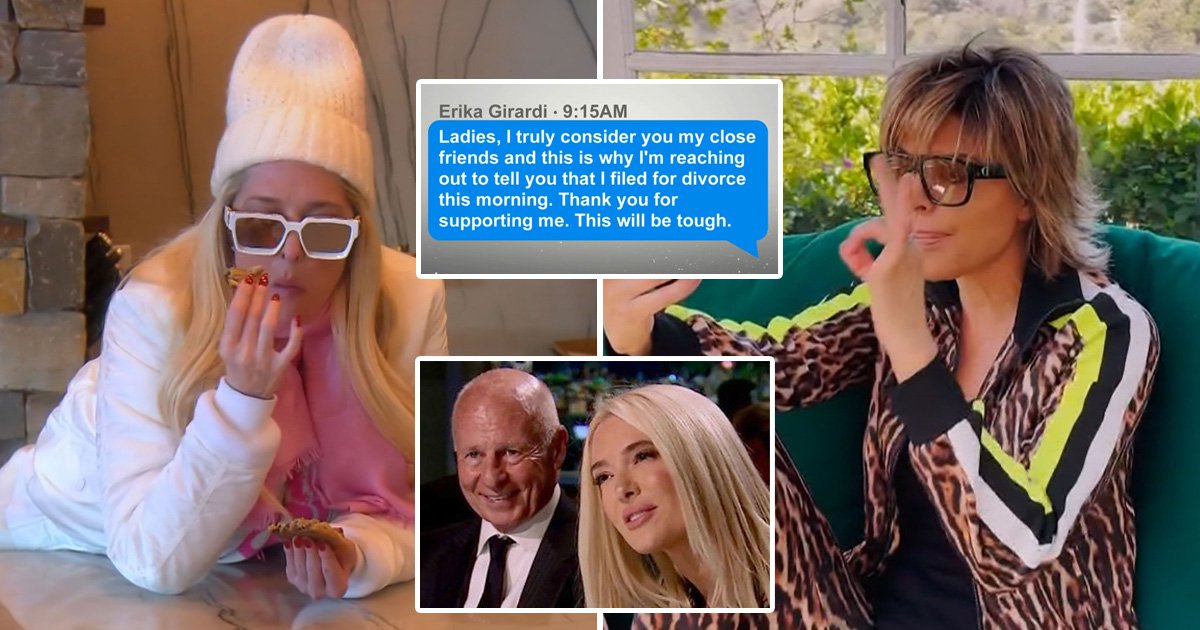 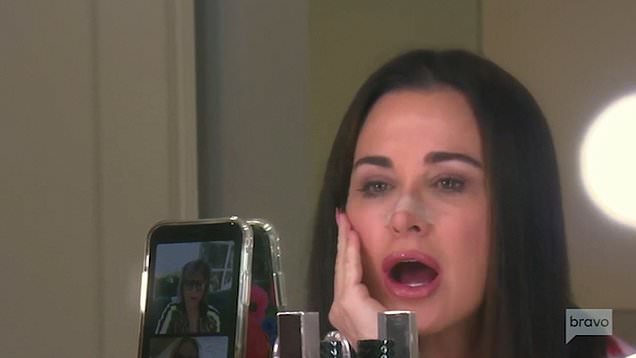 Real Housewives of Beverly Hills star Erika Jayne told her shocked castmates that she filed for divorce from husband Tom Girardi in a group text.

The latest episode of season 11 saw the RHOBH gang’s ill-fated trip to Lake Tahoe come to an end, with Crystal Minkoff and Sutton Stracke butting heads once more.

But nothing had prepared them for the bombshell news of Erika’s divorce from the lawyer, 82, amid the former couple’s legal issues.

The singer, 49, announced their split in a group text to Lisa Rinna, Kyle Richards and Dorit Kemsley, with the trio jumping on a video call soon after to discuss the message.

Her text, which helpfully flashed up on screen for those of us who aren’t privy to the message thread, read: ‘Ladies, I truly consider you my close friends and this is why I’m reaching out to tell you that I filed for divorce this morning.

‘Thank you for supporting me. This will be tough.’

A baffled Dorit questioned: ‘What is going on? Did you have any idea?’

‘No idea. And we were just in Tahoe and not one peep about anything,’ Kyle replied, as Lisa agreed: ‘Zero. Zip. Zilch. Nothing.

‘It’s Erika, so she had to do it like this. She couldn’t tell anybody.’

‘It’s a long time to spend with somebody to all of a sudden be done,’ Kyle added.

Erika didn’t appear on camera to discuss the split herself, but had cryptically hinted about the ‘truth’ in an on-camera VT during the episode, vowing: ‘Nothing is what it seems in life. Nothing.

‘And you don’t know anything about anyone. And that’s really the truth.’

The pair tied the knot in a swanky ceremony in 2000, with the reality star making her debut on Real Housewives in 2015, joining in the sixth season.

Shortly after their divorce was announced, they were accused of embezzling money ‘to fund their lavish lifestyle.’

Tom’s license to practice law in California was revoked in March amid the legal battle, and he was diagnosed with Alzheimer’s disease the same month.

Erika has denied the claims she ’embezzled millions’ of dollars, some of which was meant to go to ‘widows and orphans who lost loved ones in the tragic crash of Lion Air Flight 610.’

The fallout from their marriage ending will play out on screens, with things kicking off in the tense season trailer.

An insider told US Weekly that she was forced to ‘keep defending herself’ while filming as the women ‘kept accusing her of certain things’.

‘From day one Erika was, like, “I will tell my story, but you have to let me tell you myself.” Then news kept coming out about all these legal issues Tom was involved in and it led to the girls wanting answers,’ they continued. ’They kept trying to stir up more drama on top of the existing drama Erika had going on in her personal life.

‘She has nothing to hide. She was very open about her divorce, very honest.

‘Like she said [in the teaser], she did not see her marriage ending in a divorce.’

Real Housewives of Beverly Hills airs on Wednesdays on Bravo in the US, with new episodes dropping on Thursdays on HayU in the UK.

Doctor Who Time Fracture: Cast, location, and how to get tickets for the immersive London show