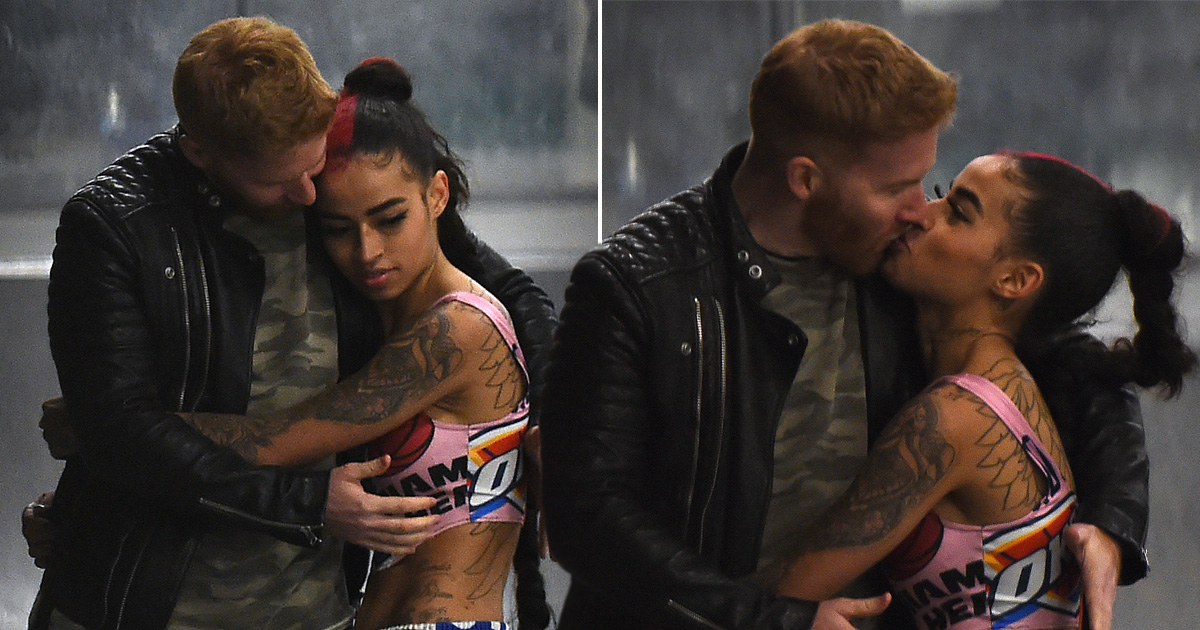 Neil Jones is clearly still enjoying the blissful honeymoon phase of his relationship with girlfriend Luisa Eusse as the pair struggled to keep their hands off each other this week.

The Strictly Come Dancing star was seen joining Luisa, 23, at the Bay 66 skate park in Notting Hill, west London so she could enjoy a late evening session on the ramps.

It appeared as though Neil, 38, left all the skating to Luisa but he found other ways to keep himself occupied, notably ramping up the PDA when he could steal a few moments with his girlfriend.

Neil seemed to be in a particularly playful mood and laughed around with his fellow professional dancer, while sweetly planting kisses on her neck as they stood around. Luisa returned the sentiment and was seen cheekily grabbing Neil’s bum as they shared a passionate kiss.

When they weren’t being lovey-dovey, Luisa got back to the other action on the skating board and was seen whizzing across the ramps and showing off her skills.

She clearly wasn’t bothered about London’s evening chill as Luisa wore a sports bra putting on-show her heavily tattooed body. However Neil made sure to wrap up against the cold weather in a grey jumper and black biker jacket.

The couple left the park at around 9pm and walked hand-in-hand with Luisa carrying her skateboard.

Neil and Luisa are evidently still going strong despite mounting rumours that she was in a relationship just three weeks before they began dating.

Sources told The Sun that Luisa, who is from Colombia, had been in London to visit ex-girlfriend Hannah Wants when she reconnected with Neil, who she had first met in South America eight months ago.

A friend close to Hannah, who works as a DJ, claimed to the paper: ‘Hannah paid for Luisa to come over and stay with her. They were very loved-up and planned to get married.’

They added that Hannah has been left ‘completely heartbroken’, while another insider claimed: ‘Neil and Luisa met last year through work, but met back up these past few weeks when Hannah and Luisa were in London for Hannah’s work.’

Neil’s relationship with Luisa also comes a year after he split from wife Katya Jones, with sources claiming he is ‘head over heels’ for his new love.

The two dancers recently sparked rumours that they had secretly married after Luisa referred to him as ‘husband’ on social media.

Alongside pictures of her embracing Neil, she wrote in Spanish: ‘How crazy, but how nice to have found my love, both vibrating in the same tunes, so strong and so pure, that Cupid stopped when he saw us go by…

‘Thank you for your beautiful, free and sensible love and it is that to you, I could tell you that any place is my home, only if it is you who opens the door…’

She signed off with: ‘Love u Husband.’

MORE: Matt Baker is returning to The One Show for Children in Need’s Rickshaw Challenge

MORE: Sinead O’Connor ‘very well’ after desperate plea that she was ‘starving’

"We respectfully ask you to take action, reaffirming your commitment to working constructively, asking Labour MPs and party members to act appropriately at all...
Read more
- Advertisement -