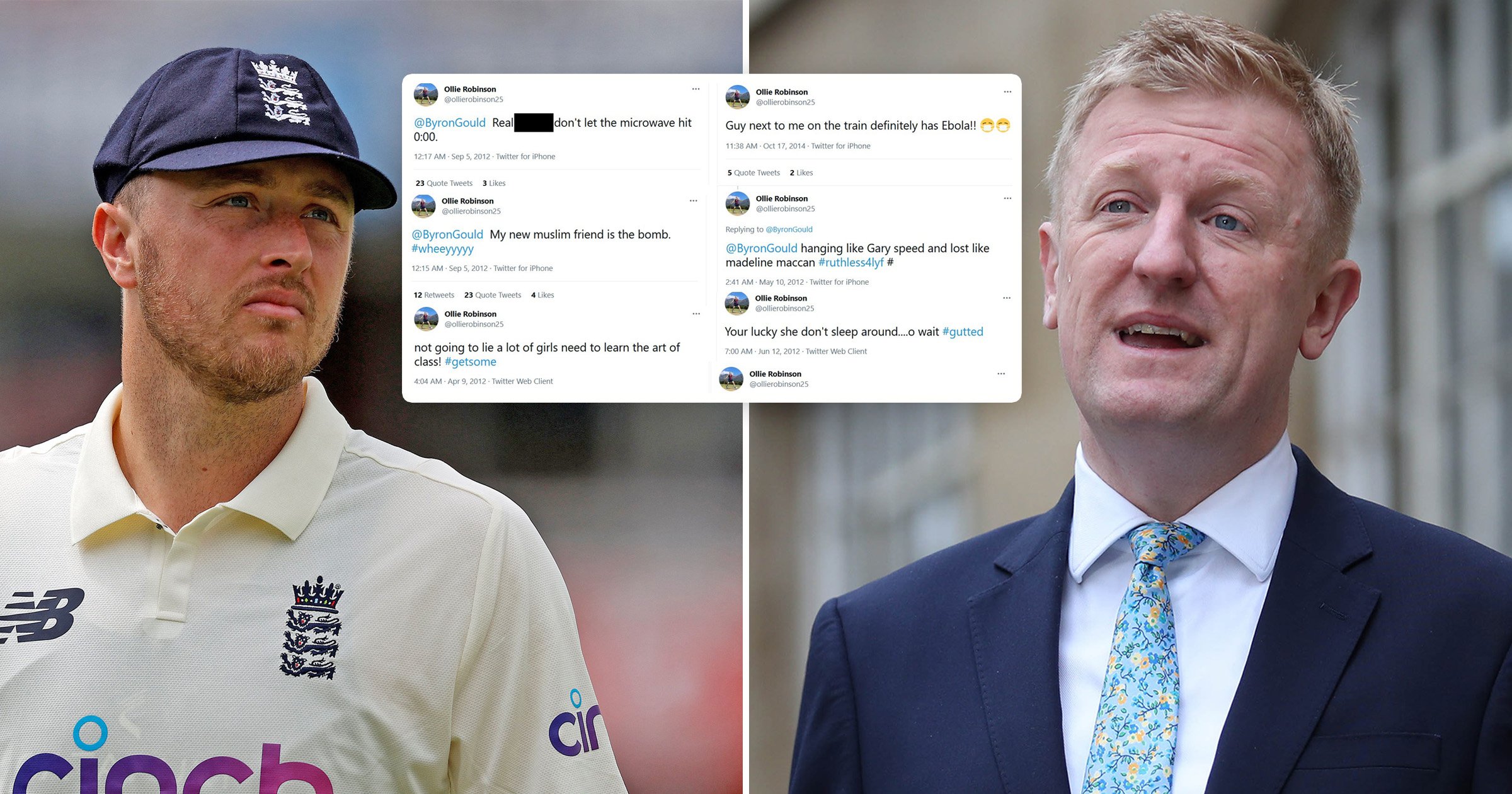 England cricket’s ruling body has gone ‘over the top’ by suspending Ollie Robinson over racist and sexist tweets he sent as a teenager, Boris Johnson and a senior minister have said.

Culture Secretary Oliver Dowden said the England and Wales Cricket Board (ECB) should ‘think again’, and he was later backed up by the Prime Minister.

The ECB suspended Robinson from all international cricket pending the outcome of a disciplinary investigation following historic tweets he posted in 2012 and 2013.

‘They are also a decade old and written by a teenager. The teenager is now a man and has rightly apologised. The ECB has gone over the top by suspending him and should think again.’

The PM’s official spokesman agreed with the minister, saying: ‘The Prime Minister is supportive of the comments from Oliver Dowden that he made via tweet this morning.

‘As Oliver Dowden set out, these were comments made more than a decade ago written by someone as a teenager, for which they’ve rightly apologised.’

What did Ollie Robinson say in his tweets?

In one tweet from 2012, Robinson used the n-word and another post said: ‘My new muslim friend is the bomb #wheeyyyyy.’

He also made sexist comments about women, saying ‘females who play video games actually tend to have more sex’.

Robinson, now 27, issued an apology for the tweets, which were unearthed and shared online on the day he made his Test debut against New Zealand last week.

The Sussex seamer made an impression on the field at Lord’s with seven wickets but was dropped from the squad for the series decider, which gets under way at Edgbaston on Thursday.

England captain Joe Root said he ‘couldn’t believe’ what had emerged, adding ‘it’s not acceptable within our game’.

After the first day’s play between England and New Zealand, Robinson read from a prepared statement to say he was ‘embarrassed’ and ‘ashamed’ of the offending posts.

They came to light hours after England had marked the first Test of the summer at the Home of Cricket by sharing a ‘Moment of Unity’ alongside the Kiwis before play, taking a stand against several forms of discrimination.

Robinson apologised to the media and to his team-mates and while Root believes the contrition is heartfelt, the England captain believes everyone within the game can take lessons following what has transpired.

After the drawn first Test against New Zealand, Root said: ‘It’s not acceptable within our game. We all know that.

‘He addressed the dressing room straight away. He fronted up to it. He showed a lot of remorse from that point onwards. You can see it’s very genuine from how he’s been around the group and the team.

‘And I think it’s a great lesson for everyone within our game that we can all do more. We all have to keep looking to educate ourselves, trying to better the environment for everyone, trying to be as inclusive as we can, keep making everyone feel comfortable to play what a wonderful sport we have.

‘It starts with us players at the top of the game. We set out the week with that moment of unity and we’re doing a lot of work behind the cricket that we want to make big change in the game and we want to make it more inclusive, more diverse.’

Asked about his immediate reaction to the Robinson tweets, Root said: ‘I couldn’t believe them, personally. I didn’t really know how to take it on the surface.

‘I think the most important thing is Ollie is part of this dressing room and we had to support him. We had to try and do everything that we could to give him an opportunity to learn and understand he has to do better.

‘We can look back about how this could have been handled better, but the fact is it shouldn’t have happened. And if we continue to keep trying to better the game right now, then in years to come this shouldn’t be an issue and moving forward this shouldn’t be something that happens within cricket.’

Robinson has a separate employment contract with Sussex so he is free to play, if selected, for the county during his international suspension.

Moment baby in pram is pinned against wall in crash leaving 13 hurt as driver, 29, who was high on cannabis is jailed