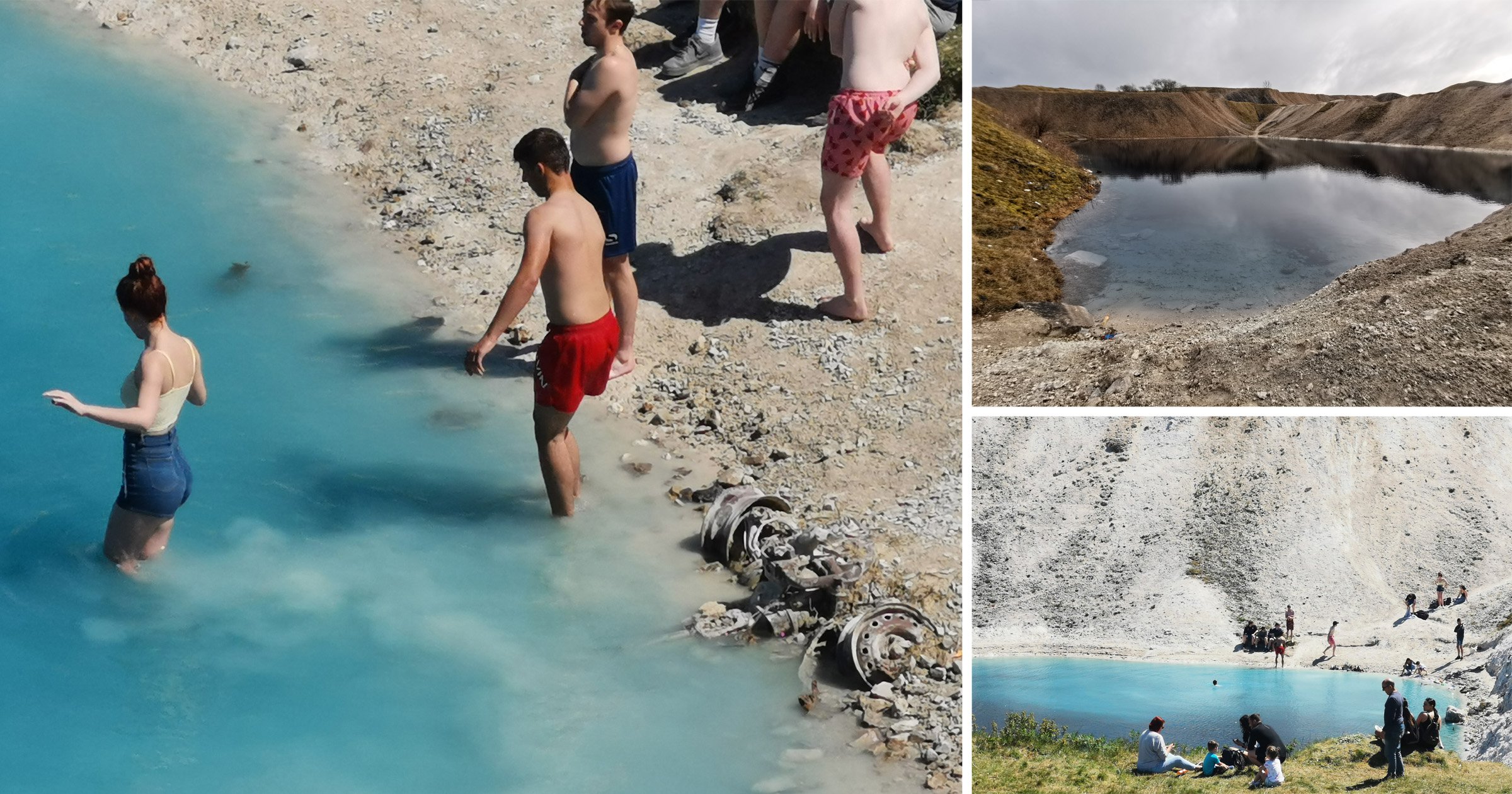 Swimmers have been warned against taking a dip in a ‘dangerous’ vivid blue lagoon.

The picturesque lake at Harpur Hill Quarry in Derbyshire has a high alkaline pH level equivalent to bleach.

Its entrancing waters can cause skin conditions, stomach problems and fungal infections for humans.

Police and the local council regularly dye the water black in a desperate measure to make it less appealing.

And as summer finally arrives, with the hottest day of the year so far being recorded this week, a fresh appeal has been issued to anyone tempted to visit.

A spokesperson for Derbyshire Police said: ‘There are a number of disused quarries across Derbyshire and throughout the country.

‘Many of them are on private land so as well as the risk of trespassing penalties, people swimming in quarry waters put themselves in danger of cold water shock, getting injured by hidden items beneath the surface or other health issues relating to pollution.

‘Please don’t put yourself at risk.’

In May last year, the force issued a warning after an estimated 2,000 people broke strict lockdown rules and travelled there during hot weather.

Police controversially used dye on the clear water and posted photos on Facebook, showing the lake after it had been turned black.

Such drastic action has not been needed yet in 2021 but authorities are keeping a close eye on any spike in visitors to the area.

The spokesperson added: ‘Officers have not received reports of anti-social behaviour around the quarry at Harpur Hill over the bank holiday weekend but continue to monitor the area and work with partnership agencies to help maintain this over a long-term period.’

The lagoon in Buxton gets its incredible blue as a result of chemicals from the quarry stone seeping into the water.

Signs leading up to the lake warn visitors that the water is toxic enough to cause ‘skin and eye irritations, stomach problems and fungal infections such as thrush’.

Another notice advises visitors that the lake has been used as a dumping ground and is known to contain car wrecks, dead animals, excrement and rubbish beneath its sparkling surface.

Set in the Peak District, the disused limestone quarry was used by the Royal Air Force to store weapons in WWII.

The new police warning comes as two teenagers died after swimming in open water in Yorkshire in the past week.

Sam Haycock, 16, tragically lost his life after he jumped in to help a friend at Ulley Reservoir in Rotherham and the body of a 13-year-old was recovered from the River Calder.

MORE : People are wading into this ‘idyllic’ lagoon without realising it is completely toxic

Joey Essex: Grief and Me viewers in tears as star returns to family home where he lived with his late mum

Do UK Covid vaccines work against the India variant?