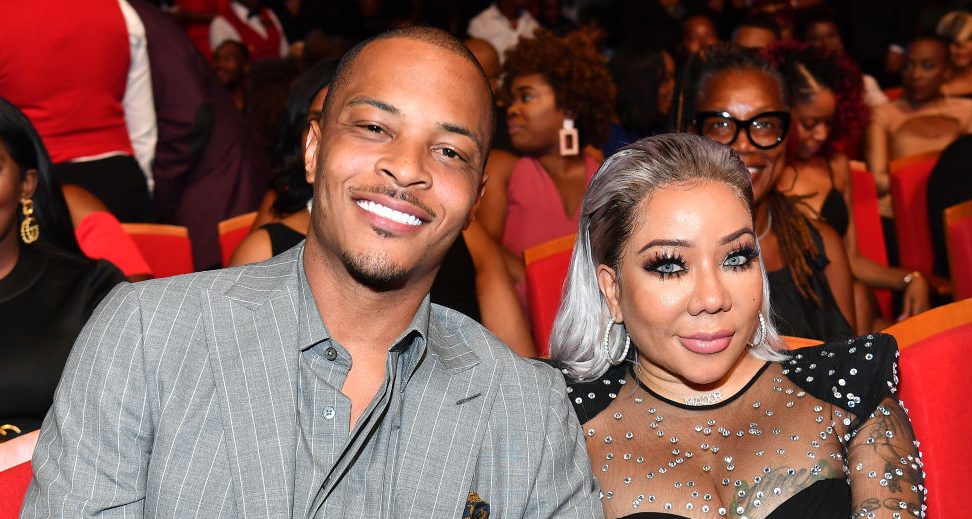 T.I. has made the sexual assault allegations against him and wife Tameka ‘Tiny’ Harris the focus of the music video for the rapper’s new song, What It Come To.

The Family Hustle stars are accused of drugging and sexually assaulting several women but have denied the claims.

In the visuals for his latest song, T.I. addresses the allegations by featuring news reports about it and appearing to brand one accuser ‘The Parasite’.

Controversially, the video opens and closes with audio of quotes from one accuser, which includes: ‘Tell the truth about me and apologise and I’m gone… Here’s the other stipulation: Do it within seven days.’

T.I. raps at one point: ‘And they say hell have no fury like a woman’s scorn.’

In one scene, a woman sends a text message which says: ‘Who want get a bag & remain anonymous?’

Several other women are then seen replying to the message confirming they’ll take part in the scam, including one response which said: ‘Oh I got all kinds of bulls**t I can make up…’

T.I., real name Clifford Harris, is filmed rapping in a booth with lyrics including: ‘People weird, be projectin’ all they insecurities/ Whatever thеy said he did he did that s**t, I’m f****n’ sure of it,’ and, ‘I got a heart made of gold, motive be the purest.’

In a direct line at his accusers, T.I. also raps: ‘Bet you thought this s**t was sweet and I would pay in a week.’

During one verse, the Atlanta-native mentions his previous run-in with the law and his jail time.

He said: ‘They bust my house and found a gun, I was on probation / All ’cause I wouldn’t participate in they investigation / I went to jail for a year, height of my career / But by the time I made it home, he got his case thrown out.’

In a statement previously released to Complex, a spokesperson for the couple denied the ‘egregiously appalling’ accusations.

It read: ‘Mr. and Mrs. Harris want to be on record and more importantly want the public to know they emphatically deny in the strongest way possible the egregiously appalling allegations being made against them by Sabrina Peterson.

‘The Harrises have had difficulty with this woman for well over a decade. They are taking this matter very seriously.’

Tiny also previously denied the gun claim from Peterson this month, responding in a comment on the Shade Room: ‘Hold up… So you want your abuser to train your sons? He was just uncle 2 years ago.

‘Now when did you say my husband assaulted you? Did you change your mind or change it back? What wit you today Pooh? I’m confused [sic].’

She added: ‘Stop Harassing My Family. You strange. Everybody know you been special (face slicing seminar lady). Please get help but leave us alone.’

In May, two more women came forward to accuse T.I. and Tiny of drugging them and pressuring them into sex.

A spokesperson for the Los Angeles Police Department then confirmed that an investigation is ongoing after they met with one woman virtually, during which she detailed an alleged assault which took place in 2005.

What happened between Trisha Paytas and Ethan Klein as they end Frenemies podcast?