BRITAIN is set to be hotter than the Balearics today as the mercury soars to 24C – but sudden hail showers are expected to sweep the East.

After a weekend of balmy sunshine, some may now need a brolly despite the high temperatures continuing today.

Brits will be able to bask in the heat as any fog and low cloud lifts away this morning, making room for sunny spells – while Ibiza just scrapes 22C.

It’s welcome news to those whose holiday plans were scuppered due to the latest green-list announcement – but as it finally starts to feel like summer, some parts of the country will be struck by sudden hail showers.

The South East of England, the Midlands, and South Wales are bracing for stormy weather after an unsettled night.

The East is expected to bear the brunt of the heavy and thundery conditions, with sharp and sudden downpours this afternoon – but will still see some of the highest temperatures. 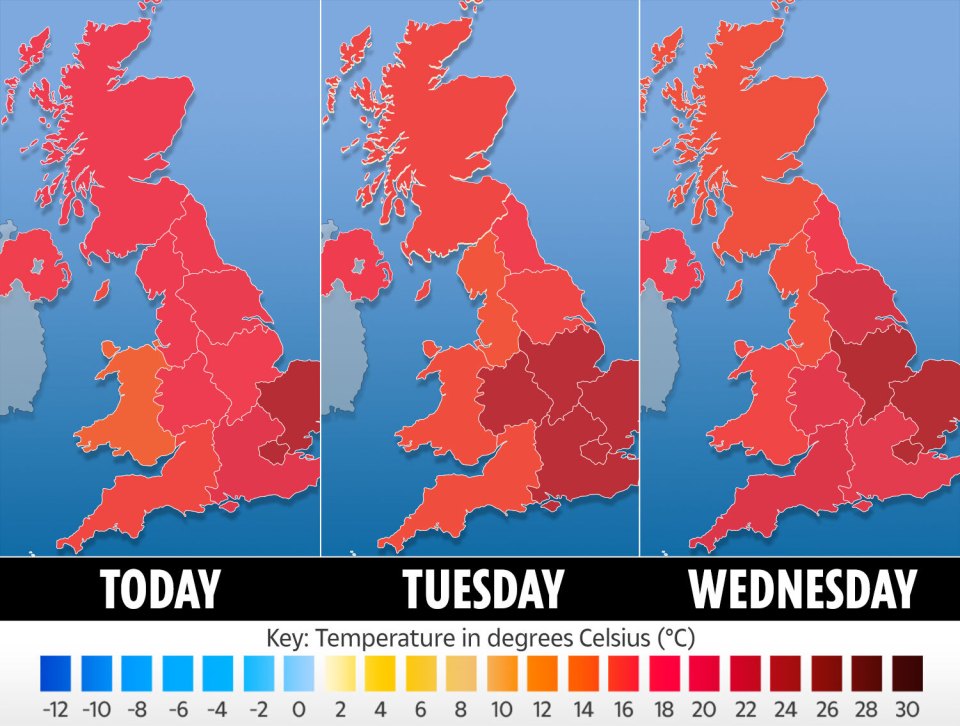 Met Office meteorologist Becky Mitchell said: “Those showers could be quite heavy and intense, and thundery in some areas.

“However other parts of the country will see a relatively nice day.”

Into the evening, the downpours slowly die away and instead are swapped for some late sunshine.

Today, the South sizzles and the capital is set to boast the highest temperature of about 24C.

The likes of Southampton, Manchester and Norwich all make it into the 20s too – temperatures that are likely to continue this week.

The warm weather is predicted to persist over the next few days, with some forecasters suggesting Friday could mark the hottest day of the year.

The mercury could reach 27C in Kent, which would knock the previous date of June 2 – when temperatures soared to 26.6C in some parts of London – off the top spot.

A spokesperson for the Met Office told the Sun Online: “We will see low 20C quite widely today and tomorrow with isolated spots in the East perhaps seeing as much as 25C.

“Temperatures are going to stay warm, locally very warm, throughout this week and into the next.

“A good deal of fine and dry weather across much of the UK for the end of June, although there could be a few showers in places and perhaps some rain in the far north at times.”

Who is Tom Jones on Gogglebox with?

Man, 21, ‘murdered flower seller who was dating his mum after “altercation” following her death’

Our children are full of love and joy, testament to everyone who’s let them know how truly special Jo was