BRITS could be treated to a mini-heatwave, with up to four sunshine-filled days of 30C in some places this WEEK.

With humid conditions building towards the weekend, 30C or more is “quite possible” on Saturday and Sunday, said John Hammond, of Weather Trending.

More sunshine, and muggy weather is on the way for Brits[/caption]

Warm weather is looming, including for the weekend[/caption]

He told the Sun Online: “It’s certainly going to be the hottest spell of the year so far, specifically across the more southern and eastern parts of the UK.

“It’ll be quite muggy air too later this week. This is what’s called Tropical Maritime Air, and may well carry a fair bit of cloud.

“So while temperatures will reach the mid to high 20s quite widely by then, the cloud might prevent 30C from being reached until Friday afternoon or, more likely, the weekend.”

John added: “However through Saturday and Sunday, as high pressure builds across the country, 30 degrees or more is quite possible.

“The heat might hold on for one more day across the southeast on Monday, but cooler fresher air will arrive from the west early next week.”

‘Temperatures are certainly on the up this week, we could see four days of 30C in the south east,’ said WX Updates[/caption]

Today the Met Office said in its blog that “high-pressure from the Azores will extend across the bulk of the country this week, bringing predominantly settled weather and allowing temperatures to slowly rise.

“Temperatures, particularly in the south, are likely to reach the mid, to possibly high 20s of Celsius over the next few days and into the weekend.

“Some areas may reach heatwave criteria.”

A heatwave is defined by the Met Office as an uninterrupted period of exceptionally high temperatures.

Met Office press officer Oli Claydon said that the south east corner – including East Anglia and Cambridgeshire – is “where the better weather is”.

He said that Tuesday featured “lots of bright sunny weather for England”.

The agency has forecast a high of 26C today in the south “about normal for this times of year”, said Oli, with warm temperatures “widespread” – and predicted to reach 22C in Scotland.

Overnight, however, there will be a sudden change as the temperature drops to 3-5C in rural areas, because of the “near clear skies”, Oli said.

Wednesday will feature more sun, although there will be some rain in the England’s north, and Scotland’s western stretches.

Highs of 27C are expected tomorrow in the south, including East Anglia and the south-east, with the mercury also climbing to 23C in Scotland.

Oli said in regards to this weekend that there could be “a maximum possible temperature on Sunday of 28C, with a chance of 29C – and we are not ruling out the chance of 30C.

“Warm temperatures are set to continue for next week.”

Unsurprisingly, the Met Office has warned that “the peak of the grass pollen season is approaching, and there will be high grass and nettle pollen levels in many southern areas this week.” 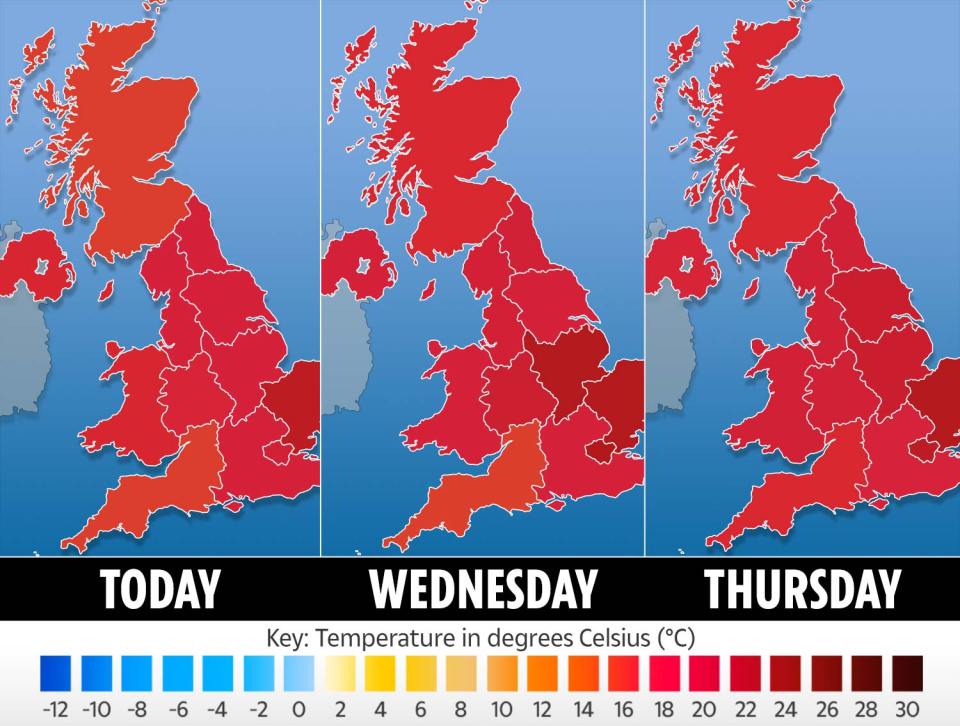 Lifesavers are patrolling Camber, East Sussex, as the mercury rises[/caption]

Beachgoers are well-prepared in Camber, taking chairs and umbrellas on to the sand[/caption]

The Weather Outlook’s Brian Gaze said temperatures will be climbing during the rest of the week, especially across southern and central regions.

He explained that “it will also be turning increasingly humid as a southwesterly flow pulls up sub-tropical air.

“Values are likely to reach the upper 20Cs and it is possible that 30C will be pipped more than once in the south between Friday and Monday.

“Nighttime temperatures will also be high in the southern half of the UK, perhaps not falling below 19C on Saturday night.”

He added: “In the north it won’t be as warm, but northeastern Scotland could see temperatures into the mid 20Cs on Sunday.

“By Tuesday cooler air will probably be returning from the Atlantic, but there is uncertainty about its southeastwards progression.

“Coming after the prolonged cool period in April and May this is the weather doing a complete U turn.”

Anthony Grist of WX Updates tweeted: “Temperatures are certainly on the up this week, we could see four days of 30C in the south east.”

The warmest day of the year so far was June 2nd when 28.3C was reached at Northolt in London, but this record may be beat come the end of the week.

The mercury could reach 27C in Kent on Friday.

Ladbrokes has already said that “temperatures will smash 30C this week” and the betting agency has a 4/5 shot for a hosepipe ban to be issued anywhere in the UK this month, while 4/6 says this goes down as the hottest June ever.

Friends enjoy a dip in the sea, Bournemouth[/caption]

Pelicans take a drink in St. James’s Park in London[/caption]

UK Covid cases surge past 4,000 to highest in two months amid Indian variant