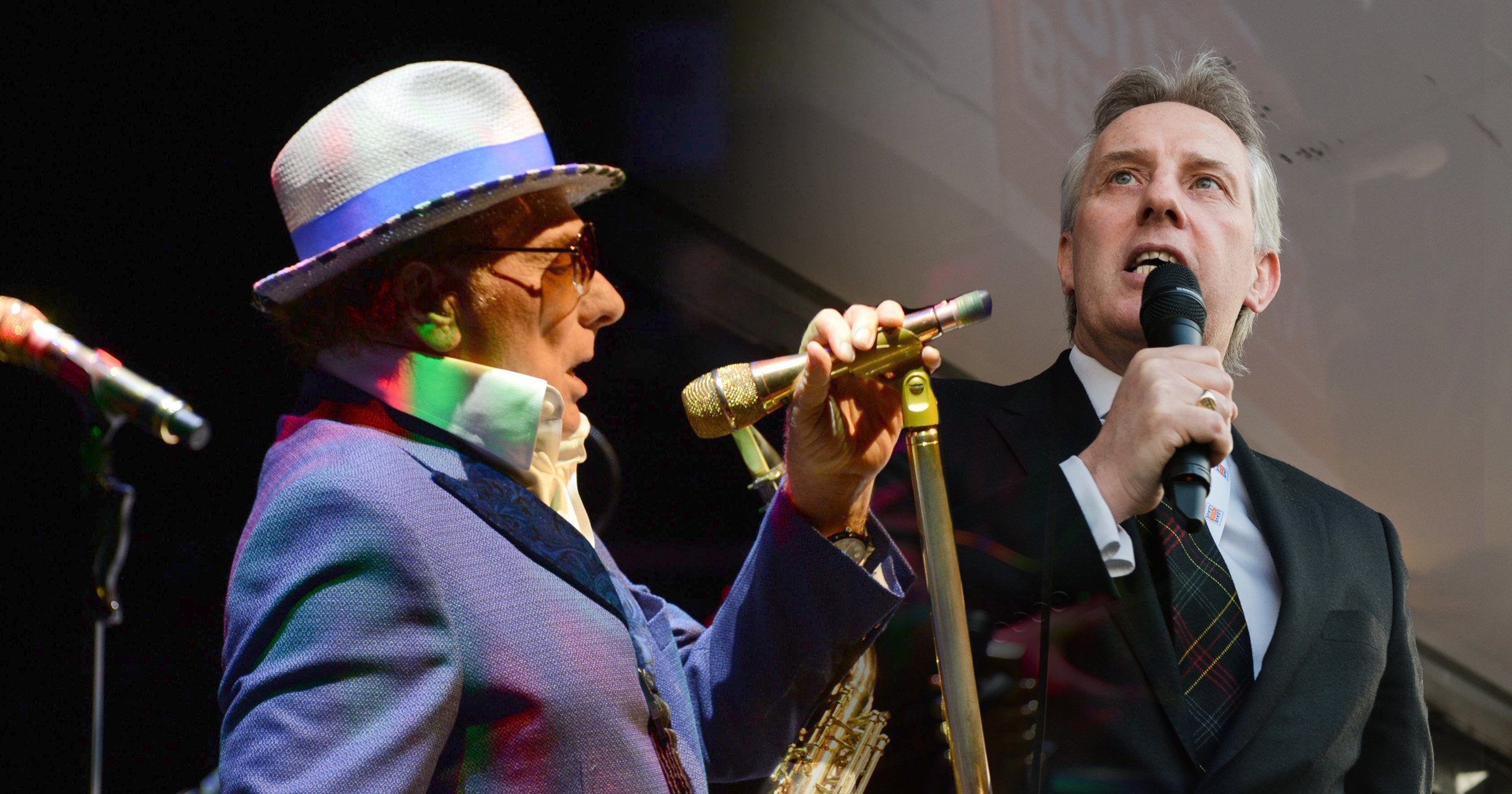 Sir Van Morrison was joined on stage by a DUP MP as he slammed Northern Ireland’s Health Minister Robin Swann for cancelling concerts at short notice in Belfast.

His comments came after four of his shows at the Europa Hotel were cancelled at the last minute on Thursday due to ongoing coronavirus restrictions meaning live music is still not permitted.

The event went ahead as a dinner with a video of a previous concert by Sir Van being played instead after management of the hotel blamed confusion by Stormont ministers for the late notice, believing they had been given the green light to proceed.

The Belfast singer-songwriter has been outspoken about his criticism of the coronavirus restrictions, and took to the stage to address the 140 guests and lead a chant about Mr Swann.

Footage of the event at the Europa on Thursday night shows Sir Van saying: ‘Robin Swann has got all the power, he is keeping us in this over 15 months,’ before repeatedly chanting ‘Robin Swann is very dangerous!’

The video then shows Sir Van inviting DUP MP Ian Paisley on to the stage where they continued the chant, before the singer says: ‘This stops when we say “no”.’

Following the cancellation of the Europa concerts, Mr Paisley had said the Stormont Executive could not ‘run a bath’.

When asked about Mr Paisley’s comments after a meeting of the British Irish Council, Deputy First Minister Michelle O’Neill responded: ‘We know it has been a really difficult time for musicians and artists, for 16 months they haven’t been able to work.

‘Many are struggling financially and we regret that that has been the case but this has been a really challenging time dealing with the pandemic.

‘We are not there yet in terms of live music but we were able to announce that from June 21, that is the date we hope we can return to live music.

‘I note the criticisms, I note the commentary from one MP, but it might be OK for him to consider his night out but we have to consider protecting the public and safeguarding against the concerns that we have.’

Outgoing First Minister and former DUP leader Arlene Foster added: ‘It is not surprising, that particular individual has always taken a very critical approach to the Executive and our decisions around Covid-19, he will probably continue in that role.

‘In terms of Covid-19, people are frustrated, people are fed up, but the decisions we take are there to try to cut down on the possibility of people having to go into hospital, to go into intensive care, and that is why we make those decisions.’

Mr Paisley issued a statement on Friday evening, clarifying his involvement in the chant, saying: ‘Last night’s event was very sad for the live music industry. I was put on the spot and called to the stage and tried to bring matters to a close by referencing some of Van’s music. What was parody, comedy, banter and sarcasm should not be blown out of all proportion.

‘I certainly don’t believe Robin is dangerous. I think the parody and sarcasm of that comment is obvious! Remember last year the Department of Health labelled a song dangerous and I think Van is entitled to parody that. There is a balance in all of these matters and at times we get them right and at times wrong.

‘We are all entitled to our own views on how the lockdown has been managed. I’m sure some will take offence – as with all things- but none was intended on my part.’

Teacher ‘told girl, 14, her trousers were “too tight for her big legs”‘

Mark Wright draws on personal experience to claim working out boosts sex drive: ‘It all goes hand in hand’