JOE Biden’s official presidential car is Cadillac One, otherwise known as ‘The Beast’.

The car is a specially-built Cadillac designed to ensure the President’s security and safety and reportedly cost more than £1million. 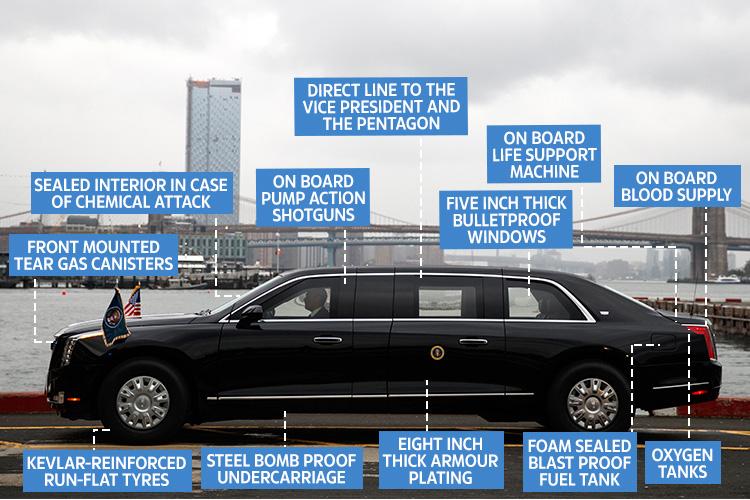 What is ‘The Beast’?

The Beast is the official presidential state car, a hulking black Cadillac known as Cadillac One – adorned with an American flag.

It is used for various outings involving the US president where security could be an issue.

It is understood that the armour-plated motor costs £1.1million and weighs at least 4.5 tons.

The vehicle is transported to whichever country the President is in.

The current model first appeared on September 24, 2018 during a trip to New York City with then president Donald Trump.

General Motors hasn’t revealed the specifics of the motor, but based on previous models it is known to be heavily armoured.

Car and Driver magazine said the headlights from the new version appear to be borrowed from a Cadillac Escalade SUV, and the new grille appears to be influenced by its 2016 Escala concept.

What are the security features of ‘The Beast’?

The high-tech limo contains a life support machine, blood supply and has an armour plated undercarriage.

The motor is also sealed against chemical and biological attacks, and as you might expect boasts bulletproof windows.

Kevlar run-flat tyres ensure the car can keep on rolling even if one of them gets punctured.

Eight inch armour plating, making the doors weigh the same as those on a Boeing 757, five inch thick multi-layered windows, and a blast proof undercarriage make it virtually impenetrable.

The door handles can be electrified to prevent entry, reports have stated.

If The Beast needs to go on the offensive it has front mounted teargas canisters as well as on board pump-action shotguns.

It also has extensive electronic communications equipment with a direct line to the Vice President and The Pentagon.

MOST READ IN WORLD NEWS

Can YOU spot the leopard perfectly hidden amongst the rocks and grass?

BEAST OF BODMIN NO MOOR

Biden brings ‘The Beast’ to G7 but will it fit down country lanes?

Former president Barack Obama told Jerry Seinfeld in 2015 that the previous version of the limo is “a Caddy basically on a tank frame.”

He added that he “could call a nuclear submarine right here” from a phone in the car.

Once a presidential car has come to the end of its life US Secret Service agents destroy the car in order to guard its secrets of manufacturing and armour.