He was caged for life in 2019 after he was convicted of orchestrating countless brutal crimes – and now his wife has pleaded guilty. 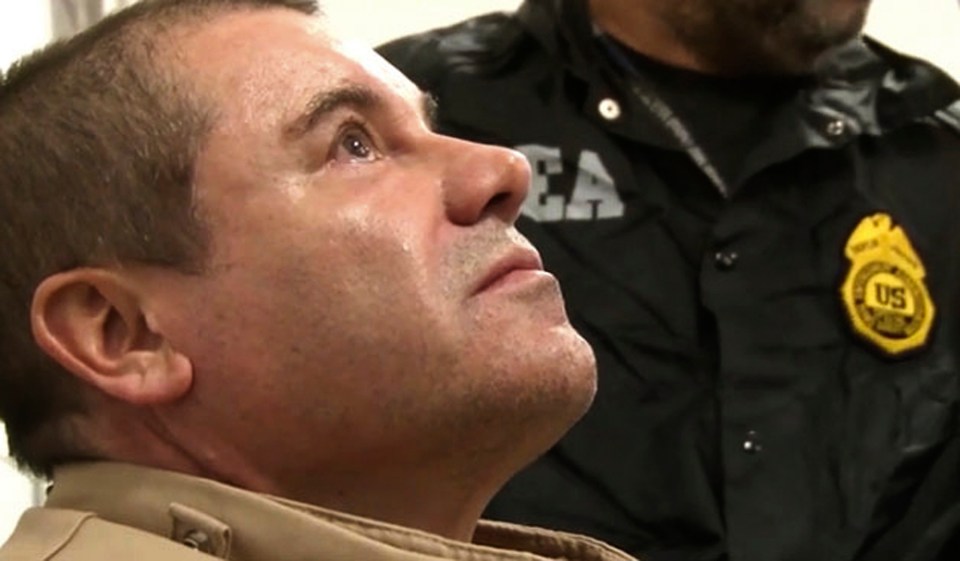 Who is Joaquin ‘El Chapo’ Guzman?

El Chapo – which means “shorty” in English – was a moniker attributed in reference to his height.

The 64-year-old headed the Sinaloa Cartel, a criminal organisation named after the Mexican Pacific coast, after his humble beginnings in a poor farming family.

El Chapo became the country’s top drug lord in 2003 after the arrest of his rival Osiel Cardenas of the Gulf Cartel.

Guzman was a “principal leader of the Sinaloa Cartel, a Mexico-based international drug trafficking organisation responsible for importing and distributing more than a million kilograms of cocaine, marijuana, methamphetamine and heroin in the US,” according to the US Office of Public Affairs.

He earned the nickname “El Rapido” for his speed at transporting drugs from Mexico to America for the Colombian cartels.

The cartel transported narcotics into the US by fishing boats, submarines, carbon fibre airplanes, trains with secret compartments and even transnational underground tunnels.

After the narcotics arrived in America, they were sold to wholesale distributors across the country, across states such as New York, Miami, Atlanta, Chicago, Arizona, and Los Angeles.

Guzman used elaborate schemes to launder the billions of dollars of drug proceeds, including bulk cash smuggling from the US to Mexico and infiltrating US-based insurance companies, reloadable debit cards, and numerous shell corporations, including a juice company and a fish flour business.

The organisation relied on a vast network of corrupt government officials and employees to protect and further the interests of the Sinaloa Cartel.

In exchange, the Cartel paid these individuals millions of dollars in bribes.

El Chapo exerted strict control of his drug empire by recruiting an army of barbaric bodyguards and creating a sophisticated communications network while continuing to expand into the European drug market.

In 2015, Europol, the EU’s law enforcement agency, said Mexican mobs had gradually begun increasing their influence over the Colombian-dominated market. In recent years, they have developed their smuggling methods, sending bulk shipments by private planes.

Who is Emma Coronel Aispuro?

El Chapo’s wife Emma Coronel Aispuro is an alleged “narco princess” accused of participating in a conspiracy to distribute cocaine, methamphetamine, heroin, and marijuana for importation into the US, according to court documents.

She appeared in court in Washington in June of 2021 for a plea agreement hearing, according to court records.

She had previously pleaded not guilty after being charged in a single-count criminal complaint with conspiracy to distribute cocaine, methamphetamine, heroin and marijuana in the US.  However, she has now pleaded guilty to federal criminal charges.

She was arrested in February of 2021 at Dulles International Airport in Virginia.

Prosecutors say Coronel “worked closely with the command-and-control structure” of the Sinaloa cartel and conspired to distribute large quantities of drugs.

What is El Chapo’s net worth?

The narcotics kingpin created an enviable empire that even saw him make it on to Forbes’ list of billionaires four years in a row.

Prosecutors say he made US$12.67 billion via the drug syndicate and as of February 2012, his net worth is estimated to be over $16billion.

US District Judge Brian Cogan ordered Guzman to forfeit $12.6 billion after his conviction.

He also said Guzman deserved the harshest sentence possible because any potentially redeeming qualities were overshadowed by “overwhelming evil.”

US officials said that Guzman’s personal arsenal “included a gold-plated AK-47 and three diamond-encrusted .38 caliber handguns, one emblazoned with his initials, ‘JGL’”.

The tenth richest Mexican is also said to own a private zoo, private planes, and luxury coastal properties.

Guzman’s Sinaloa Cartel – an international drug trafficking, money laundering and organised crime syndicate established in the mid 1980s – was also involved in the production, smuggling and distribution of Mexican methamphetamine, marijuana, ecstasy and heroin across the US and Europe. El Chapo’s sons, ‘”los Chapitos” or “the little Chapos”, are currently in command of the cartel after it was revealed previous leader Ismael Zambaba was “sick with diabetes”.

His wife Emma has an estimated $5billion fortune.

Earning the nickname “the Alcatraz of the Rockies,” El Chapo was sent to the high-security slammer to paralyse any of his escape ambitions, after he pulled off two daring breakouts in 2001 and 2014 in Mexico. No inmate has ever escaped ADX Florence, USA Today reports.

The remote prison is surrounded by razor-wire fences, gun towers, heavily-armed patrols and attack dogs, with snipers on guard in gun towers.

He arrived at the facility on June 19, two days after he was awarded a life sentence, joining infamous organised crime figures such as Kaboni Savage and Luis Felipe.

El Chapo resides in a 7-by-12-foot concrete cell with double doors for 23 hours a day in isolation and is granted an hour outdoors to get some fresh air.

His lawyer, Mariel Colon claimed the harsh conditions at the supermax prison have been detrimental to his physical health, though “he still has mental clarity”.

Colon told Univision: “He looks much skinnier, a little more stifled. He is not doing well there. It is the saddest I have ever seen him.

“He spends all his time in isolation, nobody speaks Spanish, the guards don’t speak Spanish, so many things are difficult for him.

El Chapo is shown shortly after extradition in New York on January 19, 2017[/caption]

“All he does is look at the wall, the ceiling, try to watch television a little, but he can not do it well because of the problem in his eyes.”

In 2011, 11 inmates filed a federal class-action suit against ADX Florence after enduring 23 hours a day of confinement, alleging chronic abuse and a failure to diagnose mental health conditions.

An Amnesty International report found prisoners spend years in solitary confinement and often go days “with only a few words spoken to them”.

Human interaction is virtually non-existent – meals are eaten in the solitude of their own cells, within feet of their toilets.

Guzman’s legal team are fighting to have him returned to Mexico to serve the remainder of his sentence and his US lawyers continue to appeal the judge’s decision.

Due to the coronavirus pandemic, only his two 9-year-old twin daughters with Emma Coronel Aispuro, and his attorneys can visit him.

“They completely cancelled all visits, legal and social. He was allowed three hours a week of outdoor exercise but that has also been suspended in order to limit his contact with the guards, so of course, this has been hard, or harder on him and it has affected Mr Guzman emotionally and psychologically in my opinion.”

How did he escape prison?

El Chapo’s first bold breakout came in 2001, when he managed to escape Puente Grande, a maximum-security Mexican prison in the sate of Jalisco, by hiding in a laundry cart and bribing guards.

He was facing a 20-year-stretch after he was imprisoned for murder and drug trafficking in 1993, and feared he would be extradited to the U.S.

On January 19, 2001, his electronically secured cell was opened and prison guards escorted Guzman in a cart of dirty laundry through unsecured hallways, before he reached the car park and jumped into the boot of a Chevrolet Monte Carlo.

After successfully evading authorities and the $7.5 million combined bounties of Mexico and the US, El Chapo was arrested by the Mexican Navy on February 22, 2014, after he had hidden in tunnels for days on end.

After his subsequent reimprisonment, Guzman upped his antics and performed a second escape on July 11, 2015, from the Altiplano prison in Almoloya de Juarez.

He fled through a hole under the shower in his cell that continued to a mile-long ventilated and lighted tunnel that led to a construction site, equipped with a motorbike on rails to aid his speedy getaway.

The drug lord sported a GPS watch smuggled in by his contacts that allowed cartel members to track the location of El Chapo.

His wife Coronel allegedly conspired the escape with other cartel members.

The location of El Chapo

The intricate scheme also involved buying land near the prison, as well as preparing with a steady supply of firearms and an armoured truck.

He was later extradited to the US to face criminal charges.

Who is The View co-host Sara Haines?

Road rage driver, 31, jailed after ramming stolen van into woman & calling her a ‘f***ing sl*g’ after she beeped him