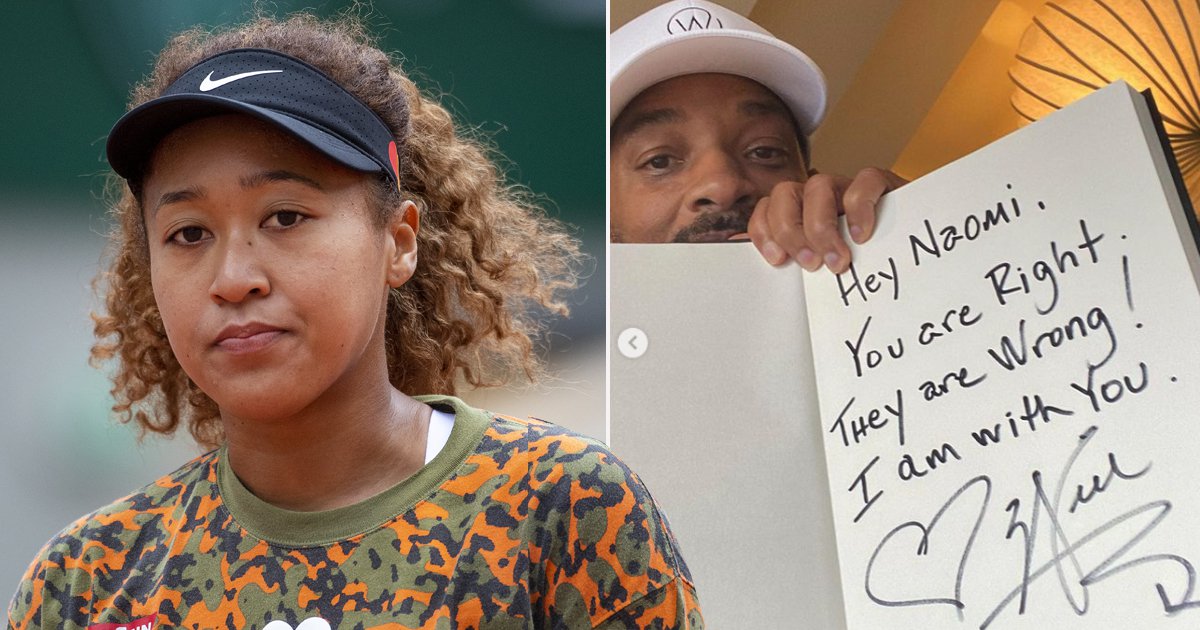 Will Smith is the latest star to show a whole load of support for Naomi Osaka after the tennis champion faced backlash for her decision to withdraw from the French Open.

Before she chose to step back completely, the world No. 2 had decided against attending press conferences during the tournament due to her mental health.

Naomi was subsequently fined £10,574 and threatened with expulsion as well as a future ban at other major events, which led to her exit from the tennis competition.

Taking to Instagram on Thursday, Will made it clear he was firmly in her corner as he shared a snap of his note to the star.

‘Hey Naomi, You are Right. They are Wrong! I am with you,’ he wrote in a large book.

The I Am Legend star’s message of encouragement came after singer Pink tweeted to reveal her support for the 23-year-old.

‘For whatever it’s worth – I’m proud of Naomi Osaka for putting her mental health, her well being above everything,’ the Raise Your Glass singer wrote.

‘If we don’t take care of our health, our wellness- well then who will? What do we have if we don’t have our health? Don’t we know by now that success isn’t worth our life?’

However, the likes of Piers Morgan didn’t share the same sentiments, as he labeled the tennis star as the ‘world sport’s most petulant little madam’.

The outspoken journalist later doubled down on his comments, claiming that the 2018 US Open champion had ‘got what she wanted – no more criticism, only praise’.

He added: ‘Meanwhile all her fellow tennis professionals will continue to fulfil their contractual obligations to the media & get criticism when deserved. This seem fair?’

MORE : Jaden Smith is opening a vegan restaurant for homeless people after I Love You food truck success

Where are Emmerdale’s Bates family now? From retirements to I’m A Celebrity

How to pick the best gaming headsets, keyboards, and mice for your console and PC

Teyana Taylor is officially the sexiest woman alive, and no arguments here

Joe Exotic launches cannabis line from jail because why not?