THE world faces going “back to square one” in the fight against Covid unless countries work together to stop new deadly variants emerging, the chief of the World Health Organisation warned today.

Amid the staggering rise of global cases that have reached nearly 200 million, Tedros Adhanom reiterated his stance on a combined effort adding that none of “us are safe until all of us are safe.”

Speaking ahead of the start of the delayed Tokyo Olympics – which is taking place among the backdrop of a covid decimated Japan – WHO chief Tedros said the pandemic would already be under control by now if rich countries had shared more vaccines with poorer nations.

But instead, he suggested that we are all vulnerable to killer strains emerging in virus hot spots as it starts to spread around the globe.

He said: “Here’s the thing about an inferno: if you hose only one part of it, the rest will keep burning.

“And the embers of one fire can easily spark another even more ferocious blaze somewhere else.”

As the UK this week eased almost all social restrictions, countries both to the east were standing on the edge of national disasters amid a deadly surge in cases fuelled by the emergence of more aggressive variants and a lack of vaccines.

On Saturday, Indonesia, a country now experiencing one of its worst outbreaks since the pandemic began reported 51,952 cases and 1,092 deaths.

Shocking images collecting the bodies of people who were unable to access treatment.

Meanwhile, in nearby In Malaysia, shipping containers were sent to hospitals because their morgues are so overwhelmed.

In Thailand, field hospitals were being built at the capital’s two airports, while in Myanmar, social media has been inundated with desperate pleas for oxygen.

It means that while Europe is hoping mass inoculation campaigns will help slow the effects of the new variants, south-east Asia’s vaccination rates remain extremely low.

In Myanmar, less than 4% of the population has received one vaccine dose, compared to more than 2/3rds in England who have both doses.

Brazil and India, two other countries hit hardest by the pandemic, have had 17% and 6% of their population fully vaccinated.

In his statement, Tedros said the global discrepancy in Covid vaccines was not only a “moral outrage” but also self-defeating as it will make the pandemic drag on longer, bringing “social and economic turmoil”.

He said: “The more transmission, the more variants will emerge with the potential to be even more dangerous than the Delta variant that is causing such devastation now.

“And the more variants, the higher the likelihood that one of them will evade vaccines and take us all back to square one.”

The Health Organisation had previously suggested that the prominent Delta variant had been detected among 85 countries, warning that the “fitter and faster” mutation from India would become the dominant strain.

Even in the UK, a country that has handed out a single dose to more than 46 million people, there has been a spike in cases with the variant said to account for more than 90% of cases.

WHO’s chief scientist Soumya Swaminathan confirmed last month that the Delta Covid strain is becoming the dominant variant of the disease worldwide and it could get even worse.

“The Delta variant is well on its way to becoming the dominant variant globally because of its increased transmissibility,” Swaminathan told a news conference.

Experts added that the Delta variant spreads more easily because of mutations that make it better at latching onto cells in our bodies. 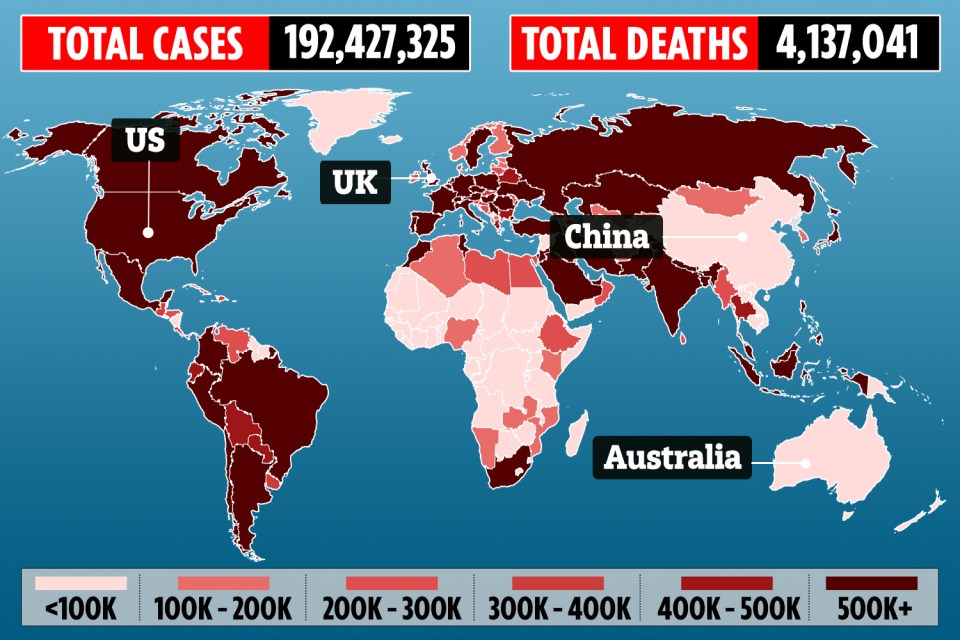 Dr Andrea Ammon, director of the European Centre for Disease Prevention and Control, warned the mutant is already spreading rapidly in Europe.

“Based on available scientific evidence, the Delta variant is more transmissible than other circulating variants.

“We estimate that by the end of August it will represent 90 per cent of all SARS-CoV-2 viruses circulating in the European Union,” he added.

Dr Ammon also said: “It is very likely that the Delta variant will circulate extensively during the summer, particularly among younger individuals that are not targeted for vaccination.

“This could cause a risk for the more vulnerable individuals to be infected and experience severe illness and death if they are not fully vaccinated.

“The good news is that having received two doses of any of the currently available vaccines provides high protection against this variant and its consequences.”

And today, the UK was handed another body blow as it was warned that a “vaccine dodging,” Labada variant could be the next to threaten the country’s new found freedom.

Although there is currently differing opinions on the severity of the Lambda strain, the WHO confirmed that is now considered as the seventh “variant of interest.”

Girl, 15, raped in the sea in front of unaware beachgoers as cops hunt teen

It is also being closely followed by Public Health England after six cases were recorded in the country.

An “unusual set of mutations” have made testing the virus’ virulence hard to do, says top science director Jeff Barrett.

He also worried a lack of gene sequencing labs in South America, where the virus is most prominent, has allowed the virus to spread almost undetected.